We will remember 2015 as the year of the UNFCCC Paris Agreement—a success for international diplomacy perhaps, but an unparalleled failure for people and for nature. It was a cloud with a silver lining though. We knew Paris would not deliver solutions to the climate crisis, but it was at least a good moment to focus media attention on the issue. It was also an important opportunity to collaborate with movements and activists from across Europe and around the world to build people power—which is urgently needed in the absence of any real action by governments. 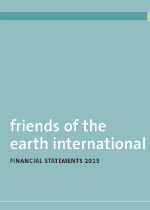 Main image Friends of the Earth campaigners protest against TISA outside first meeting of IGWG on transnational corporations, 2015 © Victor Barro

> Organisations urge Biden Administration to do more on climat...

> “Nobody can tell us what to do”: Agroecology as resistan...