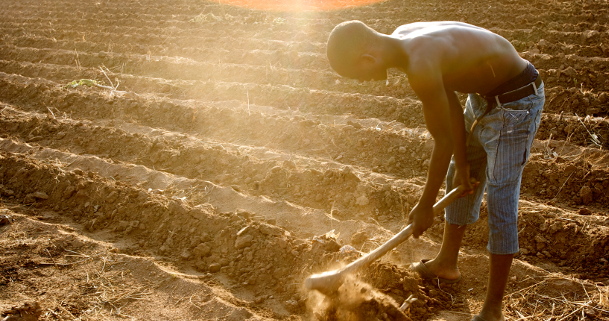 We, social movements, grassroots organizations and civil society organizations engaged in the defense of food sovereignty and the right to food in Africa, met at the World Social Forum in Tunis in March 2015 to unite those opposing the G8 “New Alliance for Food Security and Nutrition”. Social movements and organizations from Africa shared their experiences and analysis about the impacts of the New Alliance in their countries and participants from all over the world agreed to support their struggles against this threat to food sovereignty and agro-ecology. As such, we joined the Global Convergence of Land and Water Struggles and adopted its Declaration. This statement reflects our discussions and our demands to governments engaged in the New Alliance and expresses support for the call on the G7 Presidency made by the Alliance for Food Sovereignty in Africa. 2

Small-scale food producers are collectively the leading investors in agriculture, estimated to produce 70% of the food in Africa. 3 Addressing food and nutrition insecurity on the continent requires the full participation of those who are already producing, and promoting an agricultural system based on human rights and food sovereignty through local control over natural resources, seeds, land, water, forests, knowledge and technology. This is crucial for small-scale women and men farmers, pastoralists, livestock farmers, fisherfolk and hunter-gatherer societies. However, African governments and international donors support to African agriculture increasingly focuses on the extension of corporate led food and agricultural systems to the detriment of small-scale food producers.

One of the most worrying illustrations of this trend is the G8 “New Alliance for Food Security and Nutrition”, 4 launched in 2012 by the G8 and implemented in ten African countries. 5 The New Alliance, following similar initiatives such as AGRA and GROW Africa, is based on the simplistic assumption that corporate investment in agriculture will increase production and that this will automatically improve food and nutrition security and reduce poverty. This logic completely neglects that food and nutrition security means consistent access to a diverse and nutritious diet, which will not be achieved simply by increasing food production. Moreover, much of the production supported by the New Alliance is in crops with relatively low nutritional value as well as in crops which are destined for export and/or non-food production.

Notwithstanding the lack of transparency in implementation of the New Alliance, experiences on the ground and case studies confirm that the policies promoted by the New Alliance facilitate the grabbing of land and other natural resources, further marginalize small-scale producers, and undermine the right to adequate food and nutrition.6 The New Alliance cooperation framework agreements were hastily erected on the mere promise that the initiative will “unleash the power of the private sector”, ignoring the risks that will fall on small-scale food producers and other marginalized groups.7 The agreements were made with no or little participation of small-scale food producers and groups affected by malnutrition, and they contain no concrete indicators on hunger and malnutrition. Furthermore, neither the G8 nor the G7 has a mandate to pursue these policy changes in other countries; the adequate forum for agreement to policy guidance is the UN Committee on World Food Security where all concerned parties have a voice.

The adoption of New Alliance policy commitments by African countries enables companies to do business through the easing of export controls and tax laws, changing seed laws in the favor of multi-national companies, and through governments facilitating transfers of community land to investors. In spite of the urgent need for tax revenue to fund rural community development, countries have agreed to reduce taxes on agribusiness and on the inputs used most heavily by large farms. Existing projects backed by the New Alliance threaten small-scale farmers control over land and seeds, marginalize local markets and contribute to loss of biodiversity and soil fertility. This undermines the livelihoods of local communities and adequate nutrition based, among others, on access to diverse and nutritious diets. In several countries, seed laws are being introduced that could effectively criminalize farmer-to-farmer seed exchange in the future.8 These policies and laws undermine peasants’ rights, bio-diversity, and the right to adequate food and nutrition. They will exacerbate future climate and economic shocks for small-scale farmers, instead of building their resilience to cope with such shocks. These changes are being made without national debate, thereby undermining democratic structures.

Our organizations support investment alternatives made in response to the priorities of small-scale producers, and which contribute to the realization of the right to food. Alternative responses include provision of public services and infrastructure to support rural communities and local markets. Incentives such as public procurement, will allow small-scale producers to make additional investments and increase food production through decentralized, autonomous, local and sustainable food systems.

While the New Alliance emphasizes the need to “link smallholders to markets” the projects it supports privilege global markets dominated by corporate traders, ignoring the existent vibrant and diverse local food systems that ensure the sustenance of the majority of Africa’s population today. For small-scale producers market access in itself is not sufficient, but rather the conditions of their access are crucial as are the rules and logics by which particular markets operate. Small-scale producers are present above all in informal markets, which channel food for the majority of the population. Little data has been collected on existing food systems and more research and public investment should be targeted to support systems that are already working.

Supporting markets that respond to the logic of sustainable family farming can also have a positive impact on climate change, rural employment and migration flows. But it is crucial that small-scale food producers are in the driver’s seat and have their own independent organizations to support them to retain control of their land, natural resources and projects that affect them.

The African Union and the G7 will hold their Heads of States Summit in June 2015. We call on all Governments participating in the New Alliance to:

Indonesia: KRuHA (People’s Coalition for the Right to Water)

Mozambique: ADECRU (Academic Action for the Development of Rural Communities)

Switzerland: Bread for all, the Development Service of the Protestant Churches in Switzerland

To endorse this statement, please write to Gino Brunswijck: nafsn@aefjn.be

1 Dakar to Tunis: Declaration of the Global Convergence of Land and Water Struggles (Tunis, 28 March 2015) http://viacampesina.org/en/index.php/main-issues-mainmenu-27/agrarian-reform-mainmenu-36/1775-declaration-of-the-global-convergence-of-land-and-water-struggles

2 African Civil Society Demands Inclusion of Food Sovereignty and the Right to Food in the Germany G7 Presidency Agenda. http://afsafrica.org/wp-content/uploads/2015/05/AFSA-Demands-to-the-Germany-G7-Presidency-Agenda.pdf

4 Here after referred to as the New Alliance

8 Land and seed laws under attack: who is pushing changes in Africa? (AFSA, GRAIN, January 2015) http://www.grain.org/article/entries/5121-land-and-seed-laws-under-attac…

9 Voluntary Guidelines on the Responsible Governance of Tenure of Land, Fisheries and Forests in the Context of National Food Security