How do we determine whether or not a country or region is doing enough to combat the climate crisis?

Some of the biggest historical emitters claim that they are taking on a generous portion of the climate effort. Many in the global North justify their low ambition by comparing their current emissions to countries like China and India, whose total annual emissions are currently high. However, this fails to take into account the scale of accumulated emissions that rich countries have produced over the years.

Climate fair shares is a method that enables us to find out what climate action should be taken, based on:

The total amount of greenhouse gases that may yet be emitted, globally, before we are most at risk of irreversible and accelerated change.

2. The responsibility of the country
Based on the total amount of greenhouse gases the country has already emitted.

3. The capability of that country
Based on that country’s existing resources, and their ability to act.

4. The country’s right to develop sustainably.

FoE action at COP21. Rich countries should do their fair share as part of any agreement – Credit: John Englart (Takver)

To calculate a country’s fair share, we first need to understand the concept of the carbon budget.

It is generally accepted that we must contain the average global temperature rise to below 1.5 degrees Celsius. Many scientists view this threshold as ‘the point of no return’, as crossing it is likely to trigger worst-case climate scenarios. After 1.5 degrees, we could breach Earth’s natural limits and warming could accelerate beyond our control, and possibly beyond our ability to survive as a species.

Any temperature rise is dangerous. At only 1.1 degrees of warming, nature and communities around the world are already experiencing unacceptable climate impacts. Most of those suffering the worst effects have done the least to cause the crisis in the first place.

There is a time-lag between the moment carbon is released into the atmosphere, and the warming that results from that carbon. Because of this lag, an extra rise in temperature is already ‘locked in’ from carbon emitted today. Furthermore, even the most ambitious emissions reductions will require time, so that economies can be restructured safely.

So, to stay below 1.5 degrees of warming, we only have a certain amount of ‘burnable’ carbon left. This is known as the carbon budget.

In 2019 the carbon budget is already tiny, and shrinking, fast. The big question is – what is the fairest way to share it?

Many countries, particularly rich countries in the global North, have been polluting for almost two centuries. Those with larger accumulated historical emissions are more responsible for the current climate crisis.

Furthermore, many of the richest countries in the world owe much of their wealth to that pollution. Coal, oil and gas fuelled the industrialisation of these nations and enabled them to dominate the world stage, politically and economically. Countries like the UK, the US, Australia and many European nations grew rich and comfortable by using up far more than their fair share of natural resources – including atmospheric space.

This is why such countries now have both the responsibility and the capability to make the deepest and fastest cuts to their carbon emissions. We call this ‘equity’. Why should the rest of the world pay the same price, when a few countries have benefited enormously from bringing us to the brink of catastrophe?

4. The right to develop sustainably

Most countries and regions in the global South have the least responsibility for climate change, and the fewest resources to deal with the crisis. However, they still have the right to develop sustainably. This makes it imperative that they receive finance from the global North, so that they have the capacity to transform their economies towards just and renewable energy pathways.

Imagine you arrive at a dinner party. The food is already on the table, yet a few guests arrived early, and they have already finished eating most of it. There is barely enough left for you to fill your plate. Now, all the dinner guests are being asked to split the bill equally. This is clearly unfair – each diner should pay their fair share of the bill.

Financial contributions to the climate effort

There is an additional complication here – some countries have already far exceeded their own carbon allowance. Even if those countries cut their emissions to zero (which is unfortunately much less than what they have actually pledged to reduce), this effort would not meet what is required according to their fair share.

In this instance, those countries should pay towards the costs of the energy transition in the global South – so that nations with less responsibility and less capability are able to follow a safe, renewable development pathway.

Note that ‘fair share finance’ is what each country owes, or is owed, for the purposes of the energy transformation alone. This does not include finance needed for poorer and vulnerable countries to adapt to the impacts of climate change. Nor does it include the money required to compensate impacted communities for irreparable loss and damage to their land, livelihoods, infrastructure, and cultural heritage.

When these costs are combined, we can begin to understand how huge the total ‘climate debt’ owed by rich countries truly is.

Dividing the climate effort this way can also reveal to us which nations are already doing (or exceeding) their fair share of the climate effort, and which are falling far behind. Some of the results may be surprising.

-For example: the EU posits itself as a leader when it comes to acting on climate change. However, we can see from these figures that the reality is quite different. The EU has a high responsibility for causing the climate crisis, and is capable of acting in line with the demands of science and equity. Yet, so far, the bloc’s actions fall far short of what is required, according to the EU’s fair share.

-Another example: China is often blamed as the world’s biggest emitter of greenhouse gases. Yet when we view its climate action from a fair shares perspective, we can see that the country is broadly meeting its obligations, according to its responsibility, capability, and right to develop sustainably.

Furthermore, many of China’s emissions come from manufacturing goods to be exported to other countries: for example electrical appliances and clothes for companies and consumers in the US and Europe.

It could be argued that high-responsibility and high-capacity countries have ‘outsourced’ these emissions to China – meaning that the big historical emitters are partly responsible for these emissions, too. We call these ‘embedded emissions’.

Is your country doing its fair share? Use the Equity Reference Calculator to find out. 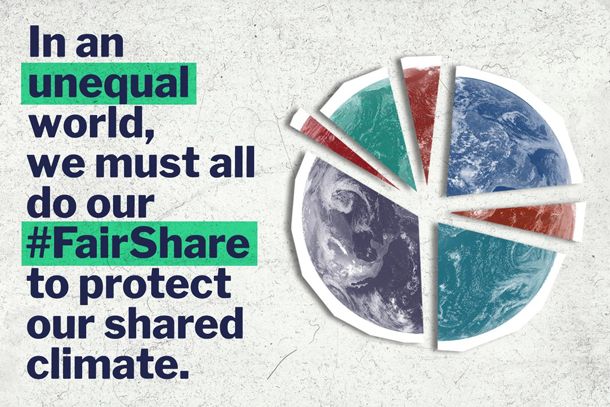