Countries from across Asia convened in Melbourne this week to negotiate the Regional Comprehensive Economic Partnership (RCEP), a trade deal that would impact almost half of the world’s population, including Thailand, Indonesia, China, India, Japan, Korea and Australia.

Trade deals seem to be impenetrable and remote aspects of international legal systems that are disconnected from local and national realities. But in fact the opposite is true. Trade and investment profoundly impacts local and national issues, and can undermine basic human and environmental rights and key principles of democracy.

The RCEP focuses on trade and investment liberalization, intellectual property rights, services, competition policy – much like other trade agreements.

It would influence how governments regulate our economy. The talks go on behind closed doors and lack democratic oversight, so the resulting deal is likely to put corporate profit before public interest.

ISDS is, in essence, a corporate court system in which companies can sue countries when they consider that government decisions or national court rulings impact on their profits.

New research from Friends of the Earth International/Europe, Transnational Institute and Corporate Europe Observatory has uncovered the human impact of these corporate courts, in which governments have been sued for US$623 billion in almost 1000 ISDS cases. This is equivalent to more than four years of the combined global spending on Overseas Development Assistance for poverty reduction.

In the rice paddy fields of Thailand, local farmers accused a gold mine of leaking toxic waste, causing serious health problems and ruining crops. The Thai government responded by suspending the mine, and later halting all gold mining in the country, while a new mineral law was developed.

But in 2017, instead of compensating the local communities for the harm caused, the Australian mine owners, Kingsgate, sued the Thai government for millions of dollars in compensation. They used the ISDS mechanism that was included in the Free Trade Agreement between Australia and Thailand.

The dispute between Kingsgate, environmentalists and local peoples, who say they had been negatively impacted by the mine, stretches back many years.

In 2010, villagers took the company to court for failing to mitigate damages and for obtaining mining permits illegally. The court ruled that the mine had indeed breached environmental protection laws, and ordered the company to submit an Environmental Health Impact Assessment.

Operations were later suspended at the Kingsgate mine in 2015 for several months, amidst ongoing environmental protests and medical tests which found that hundreds of people living near the mine had high levels of toxic substances in their blood. The company itself acknowledged problems with dust, contaminated water, noise, and cyanide management in its own reports, and researchers criticized its “lack of true community consultation”.

Communities in Thailand protest against pollution caused by the mine
Image credit: Suekanya Theerachartdumrong

Environmental problems at Kingsgate’s mine occurred after violence had erupted at another controversial mine in the country, the Loei Gold Mine, when over 300 armed, masked men attacked and beat up villagers who were blocking access to the mine.

These problems in the gold sector led the military junta who were ruling the country to halt all gold mines nationwide in 2017 “due to their impact on locals and the environment”. While human rights groups welcomed the closure, the law used in the process has also been criticized, as they empower the Prime Minister to issue any order arbitrarily without following legal and other democratic procedures.

Kingsgate hit back with threats of a multimillion-dollar international arbitration lawsuit. This threat seemed to have paid off. In 2017 the Thai government agreed to lift the suspension on the mine’s operation, which in turn led to a steep rise in the company’s share price.

Yet Kingsgate has not re-opened the mine. Instead it filed the ISDS case under the Thailand-Australia Free Trade Agreement claiming expropriation and seeking damages of an undisclosed amount. According to the national media, the ISDS claim could be worth US$900 million, a figure the government has denied.

While the Australian government views ISDS cases like this one as defending the national interest abroad, it is, rather, a way for corporations to entrench their power at the expense of local communities.

Rather than engaging with national research institutes, the precautionary principle or the local community’s knowledge, the case will be decided by three investment arbitrators, applying narrow investment law in a secret back room process.

The arbitrators’ decision could impact the entire country through the precedent it sets for regulation in Thailand. And while the ISDS case is ongoing, the company has reportedly not rehabilitated the mine that was leaking toxic substances into water sources.

This is not an isolated example. New research has uncovered how after Colombia’s Constitutional Court banned mining activities in a sensitive ecosystem which provides drinking water for millions of Colombians, Canadian mining company Eco Oro sued the country for US$764 million in damages.

When Croatian courts cancelled illegal permits issued for a luxury golf resort in the city of Dubrovnik, Croatia was hit with a US$500 million compensation claim. Romania is defending itself from a shocking US$5.7 billion claim by Canadian mining company Gabriel Resources, after the country’s courts declared the company’s proposed toxic Roşia Montana gold mine illegal.

The growing number of corporate lawsuits has raised a global storm of opposition to ISDS and the corporate trade agenda more broadly from across the political spectrum. Two countries party to the RCEP trade negotiations, Indonesia and India, have started to reform ISDS by cancelling Bilateral Investment Treaties.

Yet, as the RCEP is a regional trade deal, if ISDS corporate courts are finally pushed through in exchange for increased market access, it will likely be locked in for years to come.

Rather than more of the same failed corporate trade models, we need a new trade policy that enables communities and states to hold investors and corporations accountable for their damaging environmental impacts and human rights violations.

The RECP negotiations in Melbourne will test governments’ capacity to look after the environment and their citizens. 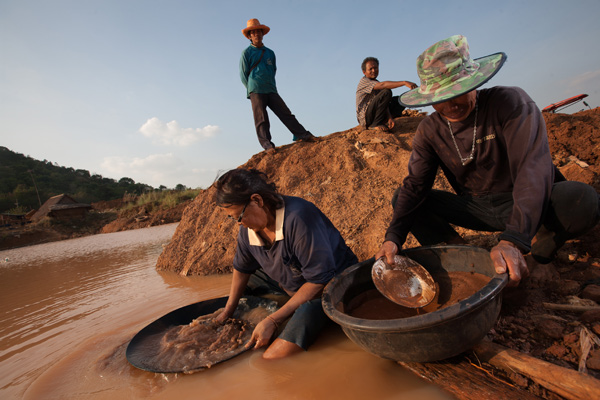 Sam Cossar-Gilbert coordinates the economic justice and resisting neoliberalism program for Friends of the Earth International, and campaigns with Friends of the Earth Australia. This article was originally published in The Ecologist, July 2019. Cover image credit: Roger Badibanga