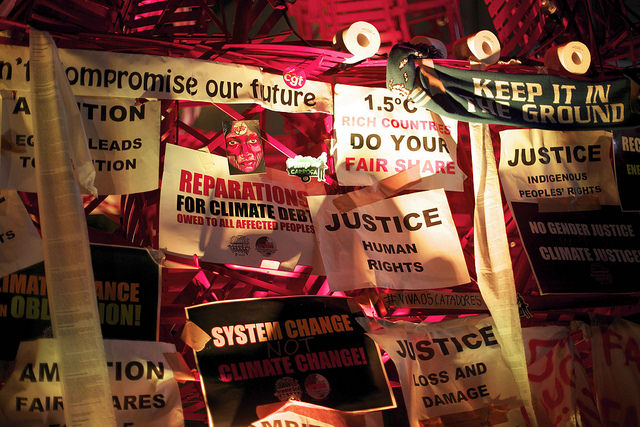 Free images of the protest are available here.

“Our governments must not settle for the draft text as it stands. People on the frontline of climate change, who are already suffering as a result of climate change, demand that rich countries to do their fair share of emissions reductions and provide necessary finance for an energy transformation in Southern countries. The draft deal fails these frontline communities,” said Friends of the Earth International climate justice and energy coordinator Sara Shaw.

Friends of the Earth International alongside civil society organisations, trade unions, and grassroots movements use a set of demands called ‘the People’s Test on Climate’ as a yardstick to assess the Paris climate deal.

The demands in the People’s Test on Climate cover the key pillars of what would constitute a just deal: a commitment to keeping us well below 1.5 and dividing the carbon budget using the fairshares principle; finance and support in line with rich nations’ climate debt; a just, systemic transformation; and justice for impacted communities, including compensation for irreparable climate damage.

Today’s text shows no progress on crucial issues, including ambition, differentiation, equity, finance, loss and damage. Many of the most important issues remain in brackets.

A short negotiations update is available below.

As of December 9 at 7pm, much of the climate agreement text remains in brackets or options, despite assurances by French Foreign Minister Laurent Fabius, who is working as chair, that as much as 75% had been removed.

To prevent runaway climate change we need urgent action based on historic responsibility and capacity to act, based on a fair shares approach, according to Friends of the Earth International.

But instead of agreeing ways to implement the existing UN climate convention, we are witnessing attempts to dismantle it by developed countries who are looking for ways to escape their responsibilities by pushing strategies such as “self- differentiating”.

Key demands like reparations for those who suffer irreparable losses and damages because of climate change are still highly contested in this draft. There is no agreement on finance. Developed countries are still planning to use a disproportionally large carbon budget, shirking their responsibilities and pushing the burden onto developing countries.

This draft means that the Paris deal could just pay lip service to the goal of keeping warming below 1.5 degrees, endangering even more millions of vulnerable people already affected by the climate crisis.

To mention 1.5 degrees maximum average global warming as a possible goal in the draft Paris agreement is just empty words if it not coupled with ambitious pre-2020 action and adequate finance for both adaptation and mitigation in the global South, according to Friends of the Earth International.

Back in June 2015 an unprecedented statement by social movements of climate- impacted communities from the global South as well as faith, labour, environmental, and anti-poverty groups representing tens of millions of people from around the world was delivered to ministers from around the world gathered at the UN General Assembly to discuss climate change.

The People’s Test on Climate 2015, is available in English, French and Spanish.

If the Paris agreement fails this test, politicians will have failed to follow the people’s lead, warned Friends of the Earth International.