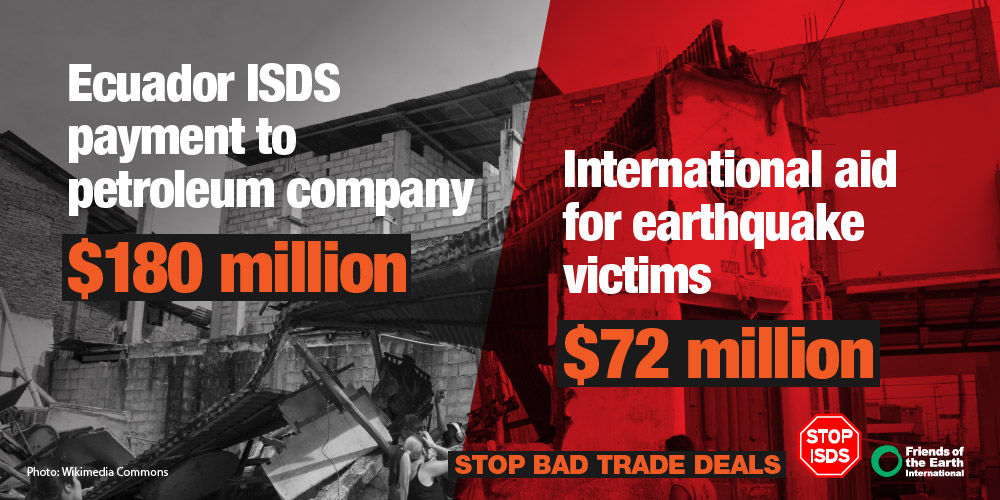 This $180 million amount is more than double the $72 million dollar International humanitarian appeal launched by the United Nations and emergency relief organisations to assist those in the greatest need with access to drinkable water, housing and basic health services.

654 people died and vital water, housing and transport infrastructure was destroyed when a destructive earthquake hit on April 16th. Over 16,000 people have been injured and another 350,000 people need emergency assistance, according to the United Nations.

When the Ecuadorian government terminated an oil concession due to the corporation’s breach of contract and national law, Occidental sued the government at an international investment arbitration tribunal using the US-Ecuador Bilateral Investment Treaty. The tribunal who ruled against Ecuador accepted that the company had seriously breached the contract. One of the arbitrators in the case dissented arguing the final award was “so egregious in legal terms and so full of contradictions that I could not but express my dissent”.

“Urgently needed public resources are being channelled to an oil multinational during an emergency because of a decision by for-profit arbitrators at a secretive international tribunal. The one billion dollars that Ecuador is paying to Occidental proves yet again the enormous burden of investment arbitration cases on public budgets”, said Cecilia Olivet, Researcher with the Transnational Institute.

Friends of the Earth International Campaigner Sam Cossar said: “Ecuador would be morally justified in prioritizing the lives and emergency disaster relief of its people over paying a multi-million dollar Investor State Dispute Settlement award to a petrol company. If Ecuador is forced to pay this $180 million, the international community would be neglecting its duty to rebuild the country.”

“Multinational corporations can use investment agreements to intimidate governments and undermine humanitarian relief efforts. Governments must work together to dismantle the ISDS system. So called free trade and investment agreements should be terminated or reviewed and ISDS provisions must be excluded from any future agreements.”, said Mr. Cossar.

Currently, there are almost 700 known ISDS cases worldwide, which exposes the illegitimate right of corporations to profit by suing states and undermining states’ ability to protect Human Rights and regulate in the public interest.