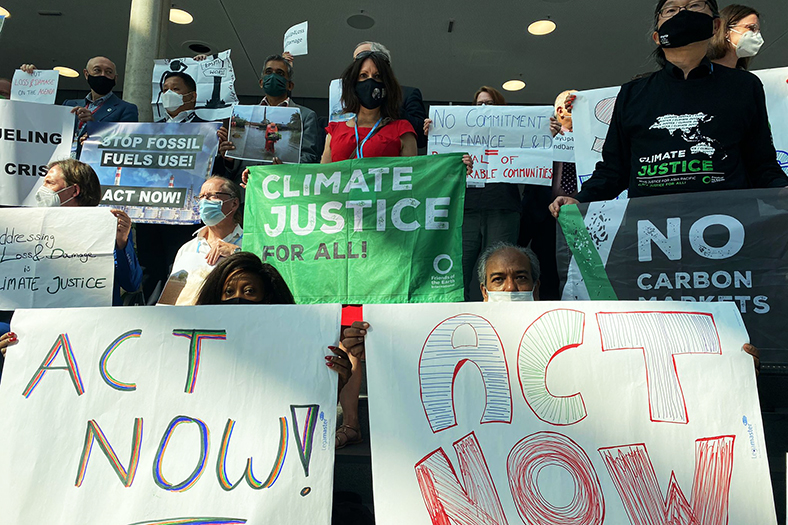 Once again, as world leaders are gathered for the Bonn conference on climate change, we have wasted another opportunity to take climate action. Civil Society Organisations express their anger and disappointment at the empty words and hollow discussions that continue to push the world, especially the Global South further towards climate catastrophe.

Closing comments from climate justice voices around the world on the conclusion of Bonn climate talks:

With only a few months until COP27 and the IPCC warning we have 3 years, if that, to peak carbon emissions, rich countries are sleep walking us all into catastrophe. The disconnect between the accelerating climate crisis outside the conference halls and the lack of concrete action inside is palpable. Developed countries refuse to even discuss long owed and vital loss and damage finance. Instead of taking action, rich countries are trying to shift responsibility for action to developing countries, while expanding their own plans to extract fossil fuels and chasing unproven technofixes. We know the solution is a rapid and equitable phase out of fossil fuels and a shift to people-centreed renewables. The obstacle to this future is not developing countries, but developed countries doing all they can to escape from their responsibilities.

The US and its allies have again made a mockery of the Bonn conference on climate change. All their statements on ambition and their shameless attempts to deprioritize adaptation and loss and damage compared to mitigation as if they are making progress on ending fossil fuels, are enraging. Instead of making clear commitments to mobilize and deliver climate finance, they advance all these dialogues and empty talk shops as smokescreens to hide their plans of escaping from their climate obligations in Sharm el-Sheik. The Global South will make sure this hideous escape plan fails.

The Global North has shown that they are not only about blocking climate finance, but climate action as a whole. The US, EU, and others are not only trying to rewrite history to erase any record of their owed climate debt. They are also blocking global progress to advance on issues such as collaborating to implement real solutions (in Article 6.8) and blocking pathways to achieve rights-based and gender responsive climate justice. But we will not let the Global North rewrite history. They must right their wrongs and address their harms. Real Zero. Real Solutions. Real Climate finance. No Net and No Offsets. These must be the benchmarks for COP27. The failure to deliver on any of them will mean the US and EU have turned their backs on climate action.

Instead of commitments for real GHG reductions and support to Global South for just transitions, at the Bonn conference on climate change we see an increasing push for risky geoengineering technofixes and new carbon markets, assaulting agricultural soils, forests, marine and coastal ecosystems. This is a new wave of threats to biodiversity, food sovereignty, livelihoods and already impacted communities. These dangerous false solutions are also wasting the little time we have to prevent further catastrophic climate change.  We strongly reject these new forms of carbon colonialism. We need real solutions and real zero. Hands OFF Mother Earth!

The rich world in Glasgow at COP26 talked about keeping the 1.5 degree C goal alive. Yet, all their actions since then have shown that the statements made are hollow and they do not mean what they say and they are hypocritical. The rich world continues to ask the developing world to pump more fossil fuels, as they also expand their own domestic production to counter the on-going energy crisis. This is despite the on-going climate impacts all around the world, including in their own countries with unprecedented heat waves, fires and massive flooding.

It is clear that the rich world is completely addicted to fossil fuels and have not managed to transition to clean energy despite all the time they have had since the 1994 UN Framework Convention on Climate Change came into effect. All they have done thus far is to continue to consume the very little remaining carbon budget left to limit the 1.5 degree C limit. At the same time, pressing developing countries to pump more oil and gas to support their addiction at a time when the developing world needs to be supported in making the clean energy transition is irresponsible behaviour. Coming to the Bonn Climate Conference and pushing for more mitigation ambition from developing countries is perpetuating carbon colonialism, and going back on their commitments under the Convention and Paris Agreement. It is time to expose the lies of the rich world, as they do not mean what they say and do not honour promises and commitments kept.

Women in communities in Asia and the Pacific are already facing climate impacts. While finance for adaptation is needed, many of the impacts go beyond the reach of adaptation efforts, and providing real finance for loss and damage is crucial. Climate finance must be based on needs, ensure direct access to women and communities, and support the design and implementation of gender-responsive climate action across all sectors, including capacity strengthening for institutions on gender. Developed countries need to be reminded of their fundamental obligation to deliver public and grant-based finance, not loans to address the needs, lives, and livelihoods of women and communities on the ground. We must say no to private financing, whose profit-making interests lead to climate catastrophe and demand justice in climate finance, to deliver gender and climate justice.

We cannot build climate justice without addressing food systems. Regarding agriculture negotiations, parties avoided mentioning “agroecology.” Even if not mentioned in the Koronivia text, we encourage governments to mobilize resources that create capacity building and education on agroecology and nutrition. The focus on agriculture should be on ensuring food security and resilience, based on nature and local communities, and not on dangerous carbon sequestration strategies. Agroecological approaches have been led by local farmers and indigenous peoples worldwide, particularly in the Global South.

We are seeing what scientists have long been projecting in real time. People are increasingly being hit by severe storms, floods, droughts and heatwaves. Marginalized communities are most affected, carrying the burden of climate inaction on the part of industrialized nations. Their avoidance of responsibility, or even acknowledgement thereof, never ceases to astonish.

With the climate crisis escalating every day, countries from the global south, representing six out seven people on the planet, were united in their plea for funding to help them recover and rebuild in the aftermath of climate disasters. But rich countries, particularly the EU, spiked the discussion about loss and damage at every single turn. Whether it was about setting up a new finance facility, providing funds, organizing technical support, or even just including the issue on the agenda for discussion at COP27 later this year, rich countries continued to block, block, block. At this very moment, 20 million people in the Horn of Africa are hovering on the brink of famine. There is a terrifying disconnect between the real world and some of the rich country negotiators who live in safe bubbles and feel able to turn their backs on the rest of humanity.

Germany has a hell of an agenda next week when leading the G7 Summit from 26-28 June in the South of Germany. We urge G7 leaders to take clear action – and not just talking – and follow what civil society around the world is demanding: an equitable end to fossil fuels and get on track to a 1,5 degree climate just pathway to limit devastating climate impacts around the world. After two weeks of talks in Bonn the hope faded away to get clear commitments by rich nations to adequately finance devastating impacts of the climate crisis. Finance in trillions is urgently necessary for mitigation, adaptation and loss & damage. We do not only talk about technical numbers here, we actually talk about lives and deaths around the world. The plan to have a well prepared COP27, happening later this year in Egypt, failed.

US State Department negotiators at the Bonn conference on climate change kept up their pressure on other countries to cut more emissions, but without providing any new finance to support less wealthy countries while President Biden is urging fossil fuel producers to pump more oil and expand gas exports to Europe.  The US is accelerating a reckless race to pollute our planet’s remaining atmospheric space when it should be the first and fastest to phase out fossil fuels.  Energy price inflation threatens the election of US climate champions in a few months but the answer is not pumping more fossil fuels but reducing demand and supporting other fossil fuel dependent countries in their own just transitions.

This statement was originally published by The Global Campaign to Demand Climate Justice – a global network of over 200 grassroots, regional, and global networks and organisations advocating for climate justice.

Contact Us
For more information, comments, reactions and quotes please reach out to us at: