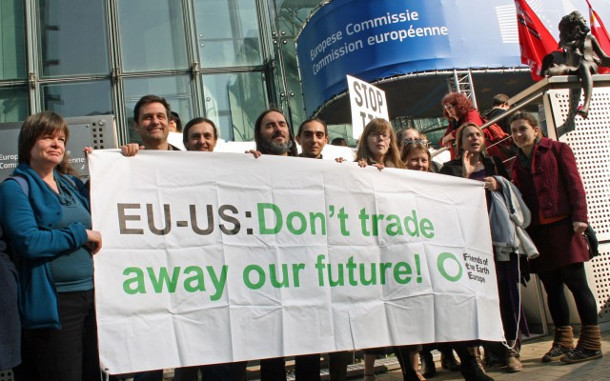 The latest round of trade negotiations between the EU and US on a Transatlantic Trade and Investment Partnership (TTIP) end today with public disapproval growing stronger than ever.

After another week of talks there is no more transparency about the content of the deal, and new evidence to suggest big business lobby groups are being given privileged access to the negotiating teams – including business-dominated events, and meetings between chief negotiators and business groups.

As it stands, Friends of the Earth Europe remains concerned the deal will trade away democracy in Europe, and safeguards that protect people and the environment.

Magda Stoczkiewicz, director of Friends of the Earth Europe said: “After a week of behind-closed-door discussions, with privileged access for powerful multinationals, citizens have every right to be concerned about the kind of future this deal could lead to. All the negotiation texts must be published so that the public know what is on the table, and what impacts a deal will have on daily life in Europe.”

Civil society groups are highlighting the dangers of a controversial investor rights clause which would give foreign companies the right to sue governments. If included in a deal, the ‘investor-state dispute settlement’ mechanism could threaten the ability of states and local authorities to take preventative action to protect public health and the environment, for example by banning risky extraction technologies such as fracking.

In the EU, growing controversy has forced the European Commission to announce a public consultation on the investor rights clause.

Powerful multinationals, including agri-business, are currently lobbying for the deal to lead to weaker safeguards, under the guise of ‘regulatory coherence’, on issues related to food and chemical safety, and GM crops.

“Corporations are trying to dismantle important health and environmental regulations by arguing that they are trade barriers,” said Erich Pica, President of Friends of the Earth United States. “For example, this trade deal could force European consumers to accept risky genetically modified organisms and meat laden with growth hormones and drugs. It could also undermine European efforts to combat antibiotic resistance; a situation which is creating a public health crisis.”