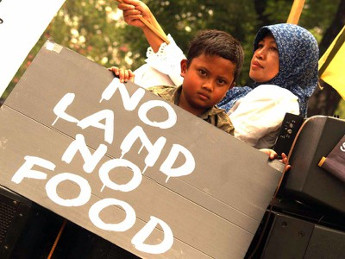 European banks, pension funds and insurance companies are increasing global hunger and poverty by speculating on food prices and financing land grabs in poorer countries, according to a report by Friends of the Earth Europe.

The report analyses the activities of 29 European banks, pension funds and insurance companies, including Deutsche Bank, Barclays, RBS, Allianz, BNP Paribas, AXA, HSBC, Generali, Allianz, Unicredit and Credit Agricole. It reveals the significant involvement of these financial institutions in food speculation, and the direct or indirect financing of land grabbing. Environmental and development organisations are calling for strict regulation to rein in these destructive activities.

Daniel Pentzlin, sustainable finance campaigner for Friends of the Earth Europe said: “Food speculation and the financing of land grabbing leads to a catastrophic instability in global food prices – forcing millions of people into poverty and hunger. European banks, insurers and funds that speculate with food and land are gambling with peoples’ lives whilst reaping huge profits. This industry needs strict regulation to protect the poorest in society.”

Friends of the Earth Europe is calling on financial institutions to investigate, publish and reduce their involvement in food speculation and investments in land. Banks, pension funds and insurers should phase-out and refrain from speculating in financial products based on staple foods, which threatens the human right to food. European regulators should introduce caps on the size of bets speculators can make to curb excessive speculation.