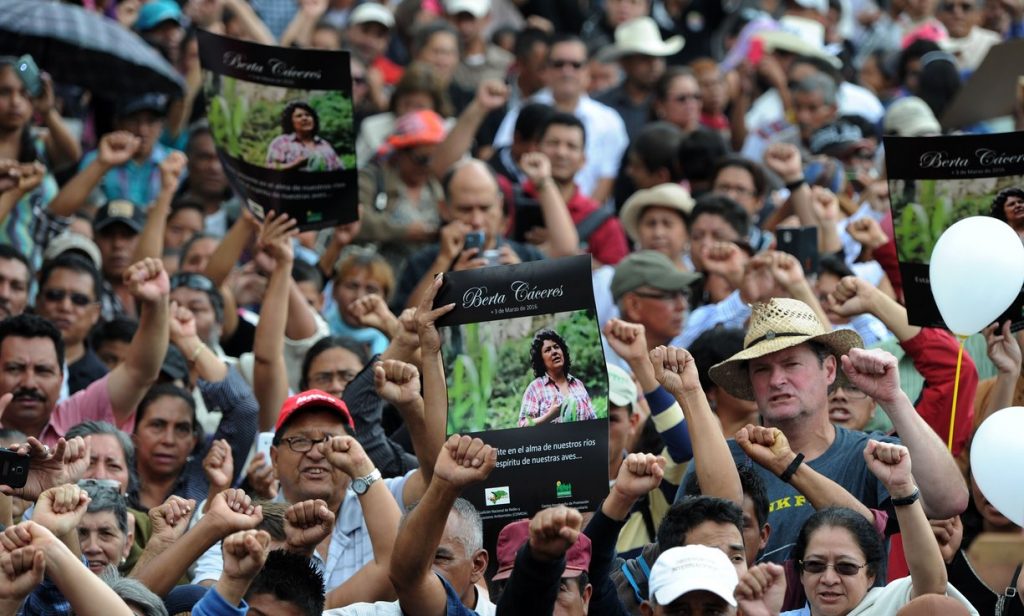 In an announcement today, FMO stated that it took the decision after a court in Honduras decided on May 8th to press charges against four individuals in connection with the murder of Berta Cáceres. One of the suspects is the acting Manager for social and environmental matters of the Honduran company DESA, the developer of the Agua Zarca project. FMO and FinnFund will organise a mission to Honduras, to take place as soon as possible, comprised of independent experts, to develop a strategy for exiting the project.

Berta was murdered on March 2nd, 2016, after leading the COPINH (Council of Popular and Indigenous Organizations of Honduras) struggle against the hydroelectric Agua Zarca project along the Gualcarque River. The conflict around the Agua Zarca project has resulted in many human rights violations and killings. Over the last few years COPINH has repeatedly contacted FMO insisting that they should not fund the Agua Zarca project, as the project sponsor had not obtained the required free, prior, informed consent of the indigenous Lenca people, and because land titles had not been properly obtained.

On March 16th, 2016, following the news that Nelson Garcia, another member of COPINH, had been assassinated (despite the international spotlight being on Honduras following Berta’s murder), both FMO and Finnfund (and subsequently CABEI, the third financier) announced that they would temporarily suspend all disbursements towards the Agua Zarca project.

With the decision to exit the project comes an end to the involvement of both financiers in the project.

We call upon the Central American Bank for Economic Integration (CABEI) to follow suit and formally announce their exit from the project. None of these financiers should continue to support projects like these hydroelectric projects which are affecting communities and their land.

We further demand that the Dutch government and other EU states introduce binding regulation for financial institutions in order to avoid more human rights violations associated with financiers of mega projects.

Notwithstanding todays’ decision of the financiers of Agua Zarca to exit the project COPINH and Friends of the Earth International / Europe reiterate the demand that an independent investigation takes place into the circumstances of Berta’s death, conducted by IACHR.

Friends of the Earth Europe spokesperson Anne van Schaik said:  ‘It has taken too long for FMO and FinnFund to take this decision, as COPINH and the Lenca people have been calling on both financial institutions for years to withdraw from the project. However, today’s decision shows that FMO and Finnfund are at least showing they are aware of the problems with the Agua Zarca project.’

Gustavo Castro Soto, director of Friends of the Earth Mexico (Otros Mundos), who injured in the same attack where Berta was murdered, said:  ‘Finnfund and FMO are partly responsible for the violence and the murder of Berta Cáceres. Financing the project Agua Zarca helped prompt continued threats to and repression of COPINH. They provided funding without consulting the Lenca indigenous peoples, violating their human rights. They have to end their involvement in the project Agua Zarca, of course. But they also should ensure they do not make the same mistake again with other projects. ‘