The urgent case for binding legislation on transnational corporations and human rights.

“I cannot freely walk on my territory or swim in the sacred river and I am separated from my children because of the threats. I cannot live in peace, I am always thinking about being killed or kidnapped.But I refuse to go into exile. I am a human rights fighter and I will not give up this fight.”

— Berta Caceres, murdered in her home by hitmen on 2 March 2016 in retaliation for her work defending her peoples’ territory and human rights.

Berta Cáceres was murdered for protesting against the Agua Zarca hydroelectric dam that was threatening a river considered sacred by her community in Honduras. The community faced years of intimidation and military repression and, in total, five members of the community were killed. The company constructing the dam turned out to be directly involved in these killings.

The banks claimed that they followed the voluntary United Nations Guiding Principles on Business and Human Rights (UNGP), despite the overwhelming evidence that the project disregarded international standards. After Berta’s murder, the companies were put under strong pressure and, finally, agreed to stop financing the project.

While corporate impunity is left unchecked, human rights and environmental activists continue to be killed protecting nature and human rights in Honduras and worldwide. Ending these human rights abuses means ending impunity for those behind the crimes, said Laura Zúñiga, the youngest daughter of Berta Cáceres.

“Our battle for dignity, truth, and justice does not end here. We will keep fighting – just like Berta Cáceres did.” 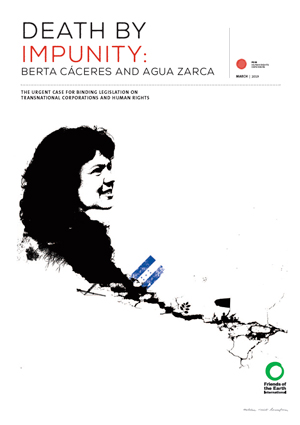