People power gathers momentum even as politicians fail in Paris

Actions and mass protests gathered pace around the world in the last two weeks, stealing the spotlight from the Paris climate talks, showing the strength of the movement going into 2016 and beyond.

People from frontline communities who are already facing the gravest consequences of dirty energy and of climate change made their voices heard. Movements of people working to implement socially-controlled renewable energy solutions, often under very difficult circumstances, gathered to share ideas and inspiration. Indigenous peoples, young people and hundreds of thousands of activists poured onto the streets of cities and towns across the globe to send one clear message: we demand climate justice and we will be heard.

In Paris, where restrictions against public protest remain in place under the state of emergency, activists either found creative ways to bend the rules, or stepped up to brave the consequences and push the boundaries of the police state. During the second week of the climate talks, actions escalated, targeting the true climate criminals. Polluting corporations who pay to steal influence at climate talks were exposed and denounced. False solutions - excuses and dangerous distractions to keep GDP growing while the planet burns - were debunked and their proponents shamed. 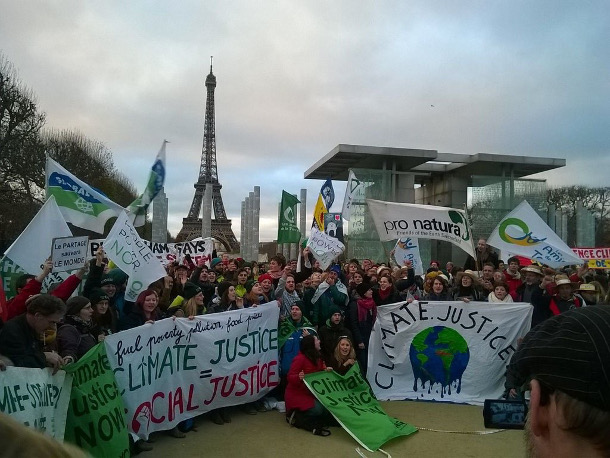 Image: Friends of the Earth groups gather in Paris

Unjust food production and distribution systems were called out for intensifying the crisis and worsening climate impacts. Food sovereignty - and more specifically peasant-led agroecology – was championed as the only climate safe and appropriate solution to our broken food systems. And again, it is the people, using tried and tested methods, who are solving these problems.

The influence of the corporate lobby on this year’s climate talks was as insidious as always. Polluters and other corporations responsible for massive environmental damage and grave human rights abuses attempted and failed to disguise themselves as part of the solution to the climate crisis. Activists in Paris and beyond staged demonstrations to uncover corporate greenwashing and influence around the talks. Businesses have no business being at these talks, least of all the polluters and human rights abusers. 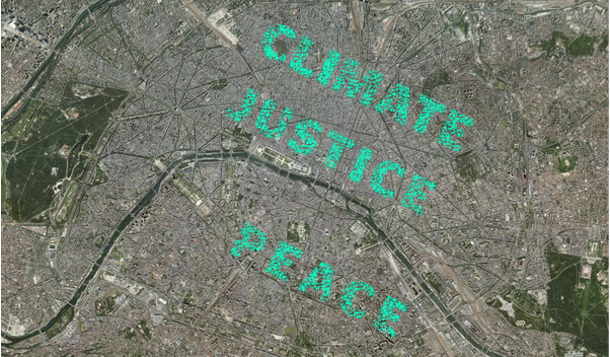 Image: Activists spell out 'climate, justice, peace' by spreading out across the city of Paris and using geocaching

Unfortunately efforts to tackle deforestation at the climate talks over the years have always been extremely cynical, as if forests exist solely as a sponge to absorb the excessive emissions of the Global North. Forests are complex and dynamic ecosystems that cannot simply be repurposed or conjured out of the air. Deforestation must be sensibly and urgently addressed. Sadly too many of the ideas drifting around the halls of the UN involve granting licenses for continuing deforestation on the basis that it can be 'offset' by planting trees elsewhere. All this ignores the fact that millions of people live in forests, understand how the ecosystems work, know how to manage them sustainably and are best positioned to protect the sanctity of their homes and ancestral memories. And as the talks ran on, people from across the world were meeting to build their understanding of community forest management, and demonstrating to reject false solutions to deforestation and the climate crisis.

Another round of climate talks ended in the failure of the so-called world leaders, with justice and ambition inexcusably missing. The agreement abandoned the people and the planet. Yet the movement for climate justice, for people's solutions, for equality, solidarity, for the planet, for hope and for peace, let loose a torrent of invincible ambition.

This is a movement rooted in the demands of the people already facing climate change and the communities whose lives and wellbeing are threatened. It is a movement that is global in its reach and outlook. It will tolerate neither injustice, political cowardice nor corruption.

And Paris has proved once again that we are unstoppable.

> Fisherfolk who plant trees: Turning the tide on mangrove def...