The case of California, Chiapas and Acre

A Friends of the Earth International report argues that Reducing Emissions from Deforestation and Forest Degradation (REDD+) initiatives fail to reduce greenhouse emissions and lead to violations of environmental and human rights.

REDD+ projects, which include techniques like carbon trading and offsetting, follow a neoliberal logic, assuming that the market is equipped to deal with environmental problems. This is counterintuitive.

When nature becomes a commodity, and local communities are either expelled from their area in the name of ‘preservation’ or employed as private conservationists, traditional practices of managing land disappear.

Meanwhile, the focus on community responsibility for deforestation underplays the huge role of large corporations and the state in damaging the environment.

All this legitimizes inequality, fuels conflict and undermines the autonomy of indigenous peoples to govern their own territories in a way is sustainable and ensures forest biodiversity, thus reinforcing the root causes of deforestation and ultimately climate change.

The report focuses on an environmental cooperation and carbon trading deal between the governments of California in the United States, Chiapas in Mexico and Acre in Brazil, which has fuelled environmental injustice.

In the case of Chiapas, communities were expelled from their land and banned from harvesting wood to make way for the production of monocultures like palm oil. This policy triggered conflict and impacted biodiversity, which has a vital role in regulating the climate.

The report concludes with a set of recommendations for tackling climate change and environmental conflicts, with a focus on addressing their structural causes and promoting the rights of peasant communities and indigenous peoples.

REDD+ The carbon market and the California-Acre-Chiapas cooperation (pdf) 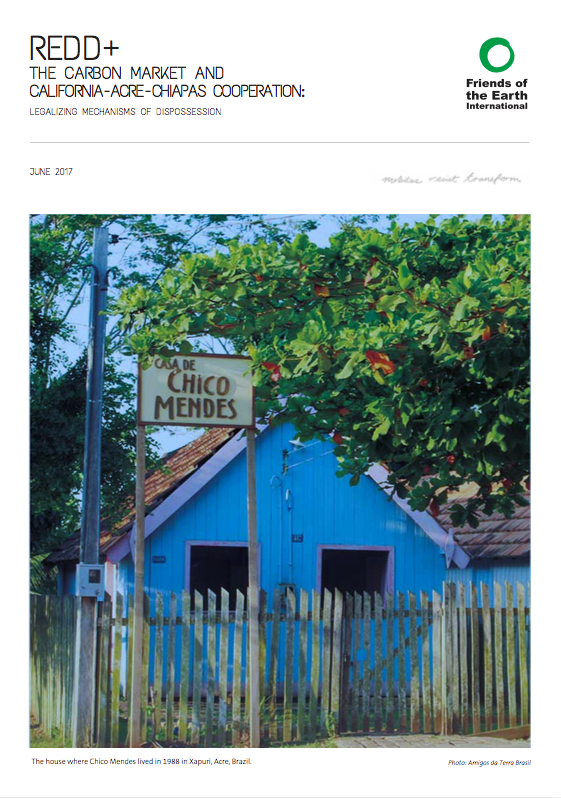 Publisher: Friends of the Earth International