Skip to content
HomeNewsFeminist frontlines: responses to COVID-19 and the care crisis.

The COVID-19 pandemic has revealed the systemic crisis we are experiencing at the global level: a social, environmental, health, economic and care crisis, which various social movements have been denouncing for a long time. But, what do the feminist movement or women’s movements say about it in particular? Together, how are we responding to this crisis? Here, we share ideas and actions that women from Friends of the Earth International and the World March of Women exchanged in a series of online discussions in 2020.

The COVID-19 pandemic has reminded us that lives are precarious, that we live in relationships of interdependence with each other and eco-dependence with nature, and that “this system is unable to guarantee care for survival”. The health crisis has shown that particularly women and people of colour, black, migrant and LGBTQ people are in insecure jobs, for example caring for vulnerable peoples and cleaning, which are usually informal and/or poorly paid. In the healthcare sector, women make up 70% of all health workers, many of whom have had to endure months working without adequate protective equipment.

At the same time, we have seen that many government responses have been insufficient in dealing with the increase in gender-based violence and job losses, with the need for health care provision and the promotion of co-responsibility policies in domestic and care work. Instead, many governments have prioritised extractive economic activities that were declared “essential” and put thousands of people at risk.

In a series of online discussion spaces held in August 2020 by Friends of the Earth International – entitled “Feminist Frontlines: COVID-19, the care crisis and our response” – women from across Africa, Europe, Asia-Pacific and Latin America and the Caribbean discussed the impacts of the pandemic, and what responses were put in place by their organisations, in alliance with other environmental, feminist, peasant and indigenous organisations.

Patriarchal violence during the pandemic

“Violence is a tool of the system to keep us women in what is considered our socially acceptable place.”

Ivana Kulic from Friends of the Earth Bosnia and Herzegovina

Due to forced lockdown measures, children, teenagers, women, and LGBTQ people around the world experienced more patriarchal violence in the home, as they spent more time with their abusers, under conditions of isolation and/or restriction of movement in urban areas. Despite the difficulty for a survivor of violence to report their aggressor while living with them, or the lack of accessible information on ways to seek help, complaints increased by 175% in Colombia, 50% in Brazil, 39% in Argentina and 30% in Mexico, Cyprus and France, according to data provided by Friends of the Earth groups in those countries. In addition to this situation of vulnerability, in which one in three women in the world suffers sexual or physical violence, mostly from their partner, there is a lack of shelters and other assistance services for survivors, and a lack of state investment in prevention and support for women survivors of violence.

From Bosnia and Herzegovina to the Philippines, Honduras to Haiti, cases of racist and xenophobic violence in the streets and public spaces were also reported, especially against indigenous, black women, women of colour and/or migrant women, due to militarisation and the exacerbation of police control. They even suffered from the implementation of anti-terrorism laws in several countries.

“Draconian laws are used during this pandemic to silent dissent from those who are articulating their concerns and demanding for public health and peoples’ rights. The law is used to jail people. We had a huge rise of women [prisoners], especially Muslim women, who took part in a peaceful protest.”

Women from Namaacha village mobilised for a community meeting with JA!-Friends of the Earth Mozambique to fight landgrabbing.

Women from African groups expressed concern about the rise in teenage pregnancy and the danger of further school dropouts among girls and teenagers in the aftermath of the pandemic. They also condemned the landgrabbing led by agribusiness companies that expelled people from their land, especially peasant women. For example, in Western Uganda, 6,000 hectares were grabbed to expand sugar cane monoculture. African women also denounced the difficulty of accessing drinking water and healthy food, which even led to the sexual exploitation of women who were asked for sex in exchange for food.

“We need to integrate feminism into our solutions. An inclusive, just and feminist transition is key. In Mozambique, the [French] fossil fuel company Total triggered a COVID-19 crisis, as their workers contracted the virus and brought the disease into the communities.

Dipti Bhatnagar, from Friends of the Earth International

Building feminist responses to the crisis

We have seen how neoliberalism works in a pandemic and how it affects different groups of people in different ways. In order for this crisis not to further consolidate a patriarchal, racist, capitalist sexual division of labour, it is time for social organisations to work together to strengthen power and recover the political arena. This is what the participants expressed at the discussion space organised by Friends of the Earth Latin America and the Caribbean, echoing the international federation’s statement from April 2020: “COVID-19 crisis is a wake up call for system change.”

Feminised bodies are already being used for unpaid or poorly paid jobs. Given the clear picture of the care crisis, the response cannot be to “industrialise” or turn this work into another commodity of the system, warned Filipina and Indian activists in the debate. They urged that co-responsibility for care work between men and women be promoted in the care economy, and that States guarantee this care as a right for all people through public policies. Women in the three discussion spaces also warned about the reality for domestic workers, the majority of whom are migrants and many of whom have lost their jobs or been infected, but lack guaranteed access to health services. 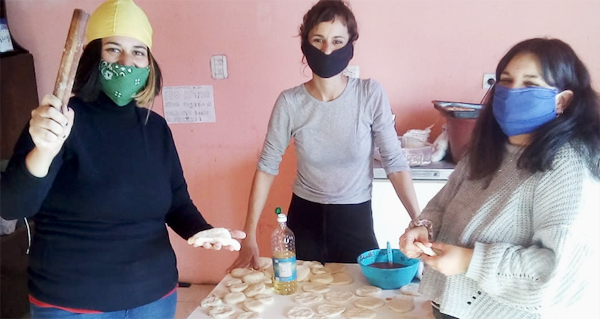 Friends of the Earth Argentina sisters prepare food in the peoples’ canteen run by the Movimiento Nacional Campesino Indígena (MNCI) – Vía Campesina. During the lockdown, the canteen was serving food to 300 neighbours.

The responses that emerged from women in the discussions – to care for their communities during the pandemic, to build a just recovery from the crisis and for system change – were very much community-based. Responses included: networks to ensure donations of health kits, community collection centres, delivery of traditional medicines, workshops on urban and rural agroecological gardening, political appeals, and mobilisation (virtual or physical, depending on the possibilities of each place). Friends of the Earth Cameroon together with rural communities produced a guidebook to raise awareness about water access and gave supplies of soap and water to alleviate the situation. Friends of the Earth Haiti distributed seeds and sanitary kits in rural areas to female heads of households, and led awareness-raising campaigns in busy places such as markets.

“We must build anti-patriarchal, anti-racist, anti-capitalist solutions, based on a community perspective, and on feminist relations.”

One of the challenges – which will remain at least as long as the pandemic goes on – is how to sustain social mobilisation in the virtual realm, knowing that it is not possible to guarantee equal access to the internet for all people, and those who now work at home are facing higher bills for internet access and electricity. Sophie Ayoo Ogutu of the World March of Women in Kenya warned: “Virtual meetings are helping us connect but there’s a lot of commodification of technology. How many grassroots women can access online conferencing platforms? How many people can actually pay for the internet?”

The main proposals made during the meetings include to:

In short, feminist responses to the COVID-19 crisis show the urgency of putting life at the centre of our demands, from Friends of the Earth International with feminist and allied organisations and social movements, so that States implement public policies in line with this, and that life is not just about survival.

Main illustration by Natalia Salvático, Friends of the Earth Argentina.