Skip to content
HomeNewsFive years on, the Paris Agreement is a reminder that the root causes of the climate crisis remain unaddressed. 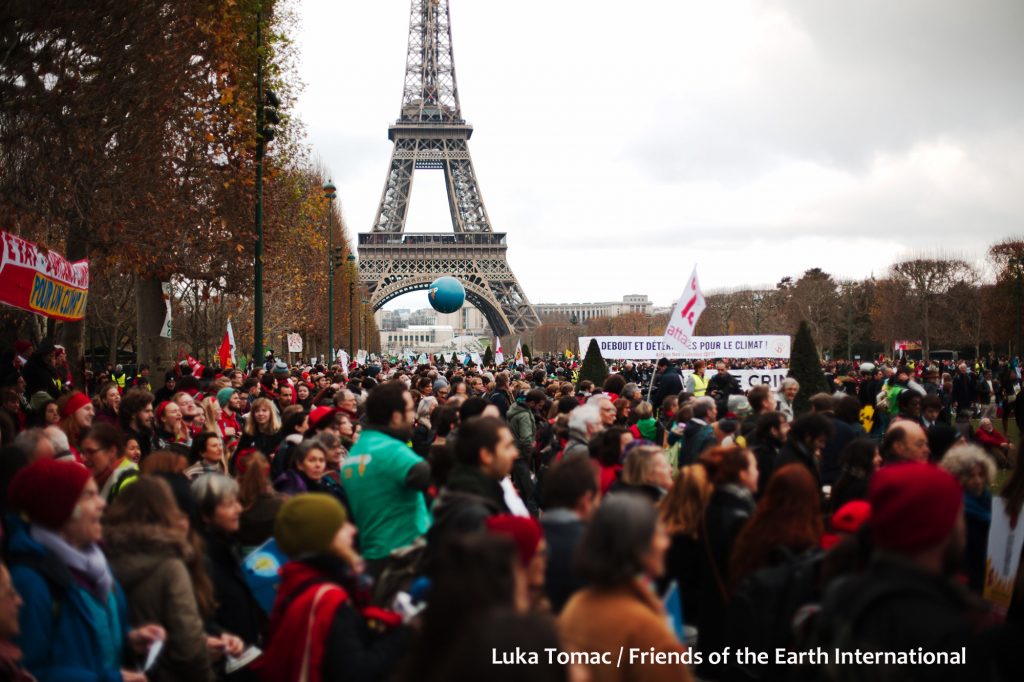 12 December 2020 marks the five-year anniversary of the adoption of the Paris Agreement, in which 197 countries agreed to limit global temperature rise to well below 2°C above pre-industrial levels, with an aim of 1.5°C. However, the national pledges which form the backbone of the Paris Agreement are insufficient to keep global heating within these temperature thresholds, and they do not take into account nations’ equitable share of responsibility. Developed countries have fallen far short in both reducing their greenhouse gas emissions and providing developing countries with the agreed financing and technical assistance for mitigation, adaptation, and to attend to loss and damage.

dipti bhatnagar, International Program Coordinator for Climate Justice and Energy with Friends of the Earth International, from Mozambique, said:

“Although the Paris Agreement fails to meet the needs of climate justice and climate science, its signing was important in showing global unity and the urgent need to limit global average temperature rise to 1.5 degrees. But five years later, we find our world mired in higher inequality, deeper crises of increasing unemployment, fossil fuel projects and bailouts for the most polluting companies, not to mention a global COVID-19 pandemic. The roots of all these inter-related crises are the same: extractivist, profiteering capitalism. We call for system change, community-owned renewable energy systems and rights for Indigenous Peoples and frontline communities, so they can continue to protect the ecosystems that nourish us and the planet.”

“For far too long, the failure of the rich world to honour its climate commitments in a meaningful way under the UN Climate Convention has been a story of broken promises. Any celebration of the Paris moment rings hollow, and smacks of yet another effort to pull the wool over the eyes of the public. The truth is that the global North is very far from doing its fair share, not only on emissions reductions, but also on enabling adequate adaptation, addressing loss and damage in poor countries and in providing real climate finance. Pledges of net-zero targets are yet another effort at fooling us into believing that these targets are ambitious, when in fact, they are too little too late and misleading. ‘Net zero’ is a dangerous concept conveniently used by polluting companies and governments to evade their responsibility for reducing emissions. They plan to use our peoples’ lands, forests, lakes and territories in the global South as their carbon sinks. These ecosystems are not carbon sinks for the perpetrators of the climate crisis!

“The EU is congratulating itself for its climate policies and for its efforts to raise its ten-year decarbonisation target, but Europe’s leaders have lost sight of equity. Europe has pumped out much of the carbon warming the atmosphere today – yet, while EU policies are evolving, our leaders are still not doing Europe’s fair share of action to halt the climate crisis and fulfil the agreement they made in Paris five years ago. It’s the planet and people around the world worst hit by climate chaos who will suffer.”

“It is appropriate that President-elect Biden has promised to re-join the Paris Agreement on day one of his presidency, but the U.S. deserves no plaudits just for showing up. His administration must sharply reverse course from decades of ‘America first’ exceptionalism and obstruction internationally to an approach based on humility, cooperation, and solidarity. This requires Biden to heed the words of the 2020 Democratic Party Platform and ‘commit the United States to doing its fair share and lead the world in the effort to keep global warming to 1.5 degrees Celsius…’ He must also commit the U.S. to providing its fair share of funds for developing countries to pay for adaptation and for the permanent losses and damages caused by extreme weather events.”