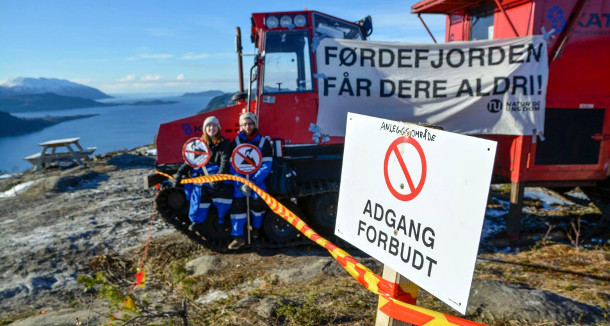 On the 17th of April 2015, mining company Nordic Mining was given approval by the Norwegian Government (Ministry of Climate & Environment and the Municipality and Modernisations Ministry) to exploit the mineral rutile from the top of Engebø Mountain, situated in the county of Sogn og Fjordane, using mountain top removal techniques. Nordic Mining was been given permission to deposit large parts of the mining tailings in a submarine disposal in the nearby Førde fjord. The local authorities in both Askvoll and Naustdal have given their consent to Nordic Mining’s application.

There is a strong environmental opposition to the project, and both the environmental movement and the local government in Førde are taking the case to the court of the EFTA (European Free Trade Association – an association of Norway, Iceland, Switzerland and Lichtenstein, set up in parallel with – and linked to – the European Union), who allege that the approval breaches the EU Water Framework Directive (to which Norway is signatory).

Nordic Mining has been granted permission to deposit 4 million tons mining waste at the bottom of the Førde fjord every year, over a period of 50 years. In total almost 250 million tons will be deposited in the fjord.

Rutile is a mineral composed primarily of titanium dioxide (TiO2), used to manufacture pure titan dioxide. Its most common use is white colour pigmentation, used in plastic and paint; and it can also be used to manufacture titanium and alloy metals. Engebø Mountain has Norway’s largest known deposits of rutile, with over 15 million tons of pure rutile. The rutile occurrence is widely spread in the area in eclogite (metamorphic) rock, but only 2-7 % of the rock is rutile.

Nordic Mining has not yet specified which chemicals they wish to use during the disposal. This has caused concerns from amongst others the Marine Research Institute. They fear Nordic Mining will use toxic and damaging chemicals. Nevertheless the waste dumped in the fjord could include sulphuric acid, sodium, phosphoric acid, carbonic acid and acrylamide as well as other acids, solvents and heavy metals including copper, nickel, lead, zinc and mercury.

The Førde fjord is one of the Norwegian West Coast’s cleanest and richest fjords – with good living conditions on the bottom of the fjord lined with corals and sponge, and the living and breeding area for many red listed fish species in danger of extinction.

The fjord has important spawning areas and nursery areas for a number of species such as halibut and herring. There are also endangered deep-water fish such as redfish, blue ling and dogfish that will lose their living areas if disposal starts. Skirting the disposal area is one of the most important spawning and living sites of the Norwegian Coastal Cod – a species that is already under threat: the Marine Research Institute recommends that no more Coastal Cod be taken before the population is stable again. Eel and River Clam have also been registered – species that have had a massive decrease in numbers in Norway the past hundred years.

The Førde fjord has ‘National Salmon Fjord’ status, meaning the fjord is important for Atlantic salmon, which Norway has a special responsibility to protect. The limit of the salmon fjord goes further into the fjord than where the disposal area is planned, but the salmon has to travel through the whole length of the fjord to get to and from the salmon rivers to breed. The status as national salmon fjord should give it extra protection. Fjords are in themselves an endangered type of habitat in Norway, due to a diverse set of negative impacts from industry, pollution, overfishing etc.

Following a recommendation from the Minister of Climate & Environment, the Municipality and Modernisations Minister granted Nordic Mining approval to start mining the Engebø Mountain.

Natur og Ungdom / Young Friends of the Earth Norway has now started civil disobedience actions – something that Natur og Ungdom rarely does. Since 2nd February, [LINK]activists have been chaining themselves to the machines on top of the Engebø Mountain, slowing down the test drilling being carried out by the mining company.