Skip to content
HomeNewsFriends of the Earth Canada: The Bee Cause

The Bee Cause calls for a ban on bee harmful pesticides and practices while proposing and delivering practical ways to help bees and wild pollinators.

Bees are very important in Canada with estimates of $1.7 billion value for their pollination services and $146 million of honey produced annually.

Dramatic die-off of thousands of honey bee colonies in Ontario and Quebec in 2012 has been tied to the use of pesticides called “neonictinoids” while planting corn and soybeans. Honey bee mortality in 2013 seems to be as dramatic in Quebec, Ontario and Manitoba with more beekeepers reporting into the federal agency, PMRA.

Neonicotinoids are systemic pesticides that are absorbed into plant tissues including flowers. They’re highly soluble and leach into ground water and contaminate soil. They are applied to corn and soybeans and a variety of other crops using sprays, seed coatings, soil drenches and granules.

The European Union decided to ban the use of three neonicotinoid pesticides (clothianidin, imidacloprid and thiametoxam) for two years while impact studies are done.

Friends of the Earth believes that neonicotinoids should be removed from the Canadian market until proven safe.

Friends of the Earth Canada conducted a poll with Oracle Poll research which found over 80% of Ontarians support the ban of neonictonoids in favour of more research. 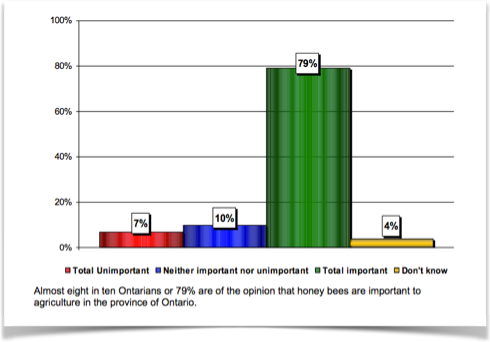 Friends of the Earth Canada hosted Dave Goulson, an awesome bee expert from the U.K., who discussed his experiences in helping the EU ban the use of neonicotinoids.