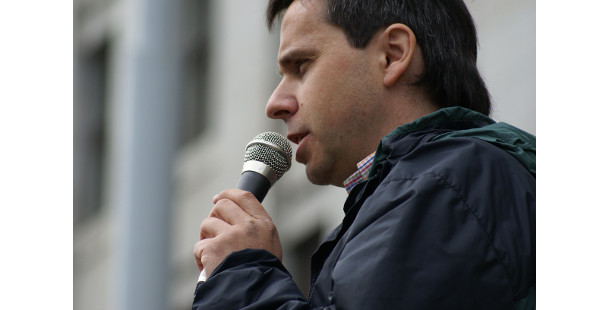 The coming November will be the twenty fifth  anniversary of the fall of the Iron Curtain. To commemorate this event the nature conservation foundation EuroNatur will present the EuroNatur Award for 2014 to the Czech environmental and nature conservation organisation Friends of the Earth Czech Republic/  Hnutí Duha.

EuroNatur President Christel Schroeder explained: “Over the last two decades Hnutí Duha has shown outstanding commitment to the protection of the Bohemian Forest National Park. Their contributions to the conservation of natural resources along the European Green Belt with their international understanding of civil society involvement are a shining example to us all.”

The Bohemian Forest (‘Šumava‘ in Czech) is a low mountain range along the German-Czech-Austrian border. During the Cold War, the Iron Curtain cut right through what is now the Šumava National Park. In this former no-go area nature was left to develop practically undisturbed for decades. Today this mosaic of ancient mountain spruce forests, moorland and wild flower meadows offers a habitat for endangered species such as the lynx, elk, Eurasian three-toed woodpecker and Western Capercaillie. Together with the Bavarian Forest National Park, Šumava National Park forms one of the largest stretches of wilderness in Central Europe and is an essential part of the “European Green Belt”, which connects vital biotopes along the former Iron Curtain.

FoE Czech Republic/Hnutí Duha campaigns to preserve the Bohemian Forest as one of the last remaining wildernesses on our continent and conducts national and international public advocacy work for this goal. The Czech organisation works closely on this task with German nature conservationists in Bavaria, such as Friends of the Earth Germany/ BUND Naturschutz. For, although on paper the park has been a protected area since 1992, the natural treasures of Šumava are under threat. The core zone of the National Park has gradually been further split up and reduced in size over the years. Moreover, here – in contrast to the Bavarian Forest – there has still not been any defined zoning carried out to date.

For example, in 2011 the newly established National Park Management further reduced the area of the core zone and ordered measures against bark beetles even in ecologically sensitive regions. Environmental activists from FoE Czech Republic/Hnutí Duha blocked the logging activities and drew international attention to the dangers with a large-scale petition. The police used violence in their attempts to move protesters and concern spread across national borders. Czech courts subsequently declared measures taken by the National Park Management and the police illegal.

Currently a bill is being planned which could make the whole idea of the National Park an absurdity: among other points permanent permission for hunting and the exploitation of wood would be granted, and barriers to construction development removed.

As Christel Schroeder said: “There will only be a future for a peaceful Europe if we take action to protect our European natural heritage. The idea at the heart of the European Green Belt is to create and foster peace and Hnutí Duha realises it in exemplary fashion.”