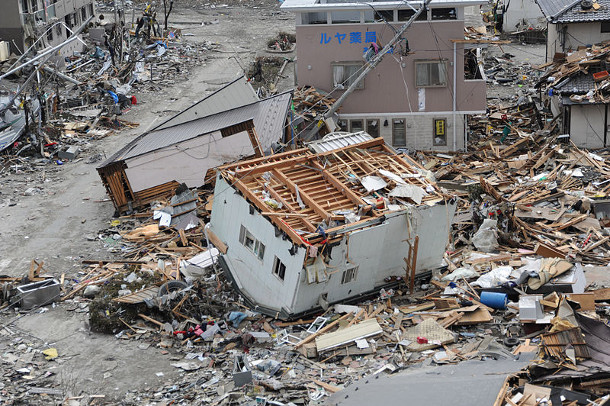 TOKYO/ AMSTERDAM, March 16, 2011 – Friends of the Earth International expresses its sincere sympathy and solidarity with the people affected by the earthquake, tsunami and nuclear disasters in Japan.

The 9.0 magnitude earthquake that struck on March 11 brought about a huge tsunami, followed by fires and, now, an unfolding nuclear disaster. To date more than 14,600 people are dead or missing and around 450,000 are being housed in temporary shelters. Many people are still waiting for help, and the nuclear crisis taking place in Fukushima is creating additional uncertainty and fear.

“We are grateful for the many messages from all over the world that we have received in support of those suffering from this natural and human-made disaster. We are seriously concerned about people’s lives and about the worrying situation of the nuclear reactors, and we urge the Japanese authorities and the Tokyo Electric Power Company to do everything possible to prevent the immeasurable damage to people, the environment and the local ecosystem that radioactive leaks or a melt-down would cause.”

Nnimmo Bassey, chair of Friends of the Earth International, said:

“Our hearts go out to the people of Japan in the tragic aftermath of the earthquake and tsunami. While these are natural disasters, the additional nuclear disaster is human made and clearly shows the urgent need for Japan and other countries to halt plans for new nuclear plants, to decommission existing ones and to invest in safe, renewable energy forms. We cannot sacrifice more lives on the altar of the nuclear power industry lobby.”

Friends of the Earth International believes that this latest nuclear crisis in Japan should lead to an urgent rethink of this dangerous technology and current plans to build even more reactors around the world. Friends of the Earth Japan are appealing for funds which will be passed on to Japanese organisations working on the relief effort.

You can donate to the appeal via the Friends of the Earth International website – This appeal is now closed. Thanks for all your support