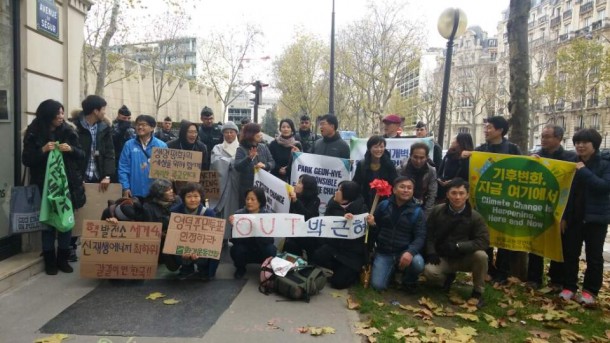 As President Park Keun Hye’s speech began at the UNESCO headquarters in Paris, Korean civil society groups, including Friends of the Earth Korea, gathered outside to protest her poor record on energy, rights and the environment. Although French police initially showed a tense reaction to the demonstration, the protestors quickly put them at ease.

Friends of the Earth Korea/ KFEM learned about the special address by President Park from the Korean labor group. Park has implemented dangerous deregulation of environmental protection and has worked against labor rights, freedom of association, and freedom of speech. A farmer who participated in a people’s march in Korea in early November was hospitalized following a police attack. He is still in a coma.

Police quickly asked them to move the demonstration across the street. Although the groups initially voiced their resistance, they eventually complied. However they gradually scaled up the action, expertly and politely negotiating to continue their action against the backdrop of Paris’s highly tense security environment.

After a forty minute demonstration, Choony Kim – Director of International Affairs/ Campaigns at KFEM/FoE Korea and member of the Friends of the Earth International executive committee – approached the police, saying “In Korea, when we finish our demonstrations, we sing a song and dance. We would like to do that here in Paris too, but we need your permission. What we propose to sing today has a special significance for Korean groups and French Police. Its our way of saying thanks to you because you allowed this protest and you did not take us to the police station.” The police officers agreed.

Several of the groups sang songs, including some Korean activist songs. The Won Buddhist group sang and danced to “Like a rock” a popular activist song in Korea. It means “please stand strong like a rock always, even in the face of the challenges to the achievement of justice.” Br. Rupino Lim, Hanwook, of the Order of Friars Minor (OFM) and chair of the Climate Yathra organized by KFEM, sang “Climate Arirang”. He revised the lyrics for the Climate Yathra. It will feature at KFEM’s side event to COP21 on December 5.

More than forty Korean civil society representatives are already in the city and a further forty will arrive next week. Twenty of those attending yesterday’s actions are from faith groups, including Buddhist, Won-Buddhist, Catholic, and Protestant.

While this was a very positive and successful action and the tense situation in Paris seems to be calming, many groups are still experiencing difficulties carrying out demonstrations on the streets of Paris, as the behavior of security forces remains unpredictable.