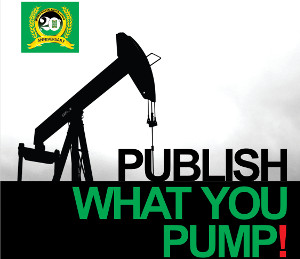 The Environmental Rights Action/ Friends of the Earth Nigeria (ERA/FoEN) today (July 24, 2013) launched a new campaign titled “Publish What You Pump”, which aims to fill the gap in the present Publish What You Pay and the Nigeria Extractive Industries Transparency Initiative (NEITI) processes.

At an event in Port Harcourt graced by representatives of civil society groups, community-based organizations and the media, ERA/FoEN said that although the NEITI processes have been ongoing for nearly 12 years, it has largely failed to sanitize the Nigerian petroleum sector or reduce the level of corruption as Nigeria loses nearly 500,000 barrels of crude oil per day, costing the nation nearly $8 billion dollars per year.

The initiative will require that institutions such as the Department of Petroleum Resources (DPR) set up appropriate guidelines for measuring oil and gas production as well as have the necessary tools to carry out their oversight functions.

In his presentation, ERA/FoEN Executive Director, Godwin Ojo said that today marks an important milestone in the launch of a national and global advocacy initiative which will address the lack of transparency and accountability in the oil and gas sector thereby posing a grave threat to national security and sustainable development.

The domestication of the Extractive Industries Transparency Initiative (EITI) into the Nigerian context seeks to address poor resource governance and revenue mobilization to reverse the resource curse. Nigeria is endowed with abundant natural resources but is unable to utilize this for the wellbeing of citizens. As a result, poverty is rife, and more than 50 percent of its citizens live on less than US$2 per day. The Nigerian government is yet to properly account for the US$ 600 billion accruing from oil in the last four decades. We believe that given the necessary political will and prioritization, Nigeria can afford a National Basic income Scheme (NaBIS) of about N15,000 for all unemployed Nigerians if all the leaks, looting and theft of its resources are eliminated.

The Nigeria Extractive Industry Transparency Initiative (NEITI) audits have unearthed a variety of discrepancies over the 10-year audit period and discovered nearly $2.6 billion dollars loss, tax evasion, and non-payment of royalties by the oil majors. In all counts, the oil majors failed to respect the NEITI findings but have ignored them with impunity.

The Publish What You Pump draws attention to the crime scene of ecological devastation, ecocide, and oil theft in the Niger Delta. It is time to hold oil companies and the presiding captains overseeing these rots and deaths corporately and personally accountable for the deaths and destruction they are helping to create.

The lack of transparency and accountability in the oil sector is leading to massive oil theft from the point of production to the point of sale. For example, it is the aspiration of the federal government to increased crude oil production to 4mbpd in the near future. We state categorically that government is already realizing its aspirations and producing well beyond 4mbpd that is far above the oil industry disclosed production rate that is averaging 2.4mbpd.

The recent disclosure in July that crude oil theft from pipelines has reached alarming proportion of 400,000 bpd is restricted to the Bush Refineries by local oil thieves. What about the more massive oil theft that is going on at the oil wellheads, flow stations, and export terminals that are directed at the international market? In addition to this, there are over 4,000 oil spills in the Niger Delta and not one has been effectively cleaned up. The volume of the spills averages at least 1 ExxonMobil Valdez spill per annum, that is, about 500,000-700,000 barrels spilled in the Niger Delta on a yearly basis.

The frequent oil spills and gas flaring has degraded the environment, destroyed livelihoods, led to human rights violations, violent conflicts, impoverishment and ecocide such that the Niger delta lies prostrate on a stretcher and panting for breathe.

Who Is Afraid of Metering?
The continued resistance of the oil companies to metering oil and gas at well heads and flow stations and the acquiescing of the regulatory agencies as well as other institutions of government can only point to collusion between the oil majors and powerful government officials who benefit from the oil theft. Indeed, in the oil sector, it is business as usual as the regulator has firmly become the regulated. During the recent Joint Senate Committee hearing on the Petroleum Industry Bill, while the oil companies are advocating for metering of crude oil at the point of sale, civil society groups are advocating for metering at the point of production from the oil well heads, flow stations and export terminals.  The core issue affecting the oil and gas industry is the failure and or refusal of operators in the industry and regulatory bodies to publicly disclose or engage easily available scientific templates for precise measurement of the volume of all oil and gas produced in Nigeria, and at the different stages of the production process.

Benefits
The Publish What You Pump Campaign has tremendous benefits. First, it effectively shatters the myths and misconceptions that it is technologically impossible to ascertain the volume of oil and gas produced on a daily basis in Nigeria.

Secondly, the PWYPC will reduce the level of waste, enhance revenue for infrastructure and social amenities provision. It will drastically reduce or eliminate oil theft if the technology to ensure scientific and real time precision metering of oil and gas flows at any point in the oil and gas production and supply are deployed. The current practice of solely relying on the oil sector for crude oil production figure is clearly unacceptable. Thirdly, the initiative marks a significant threshold in aggregating voices and actions of civil society groups, local communities, the media and all Nigerians towards achieving the critical mass required to effect fundamental changes in the way the Nigerian oil industry has been run in the last five decades.

Although the metering of the production line is important in the short term, it is the national shift in energy production and consumption from fossils to renewable sources of energy that are the more relevant for a shift towards a post petroleum economy that is imminent for Nigeria.