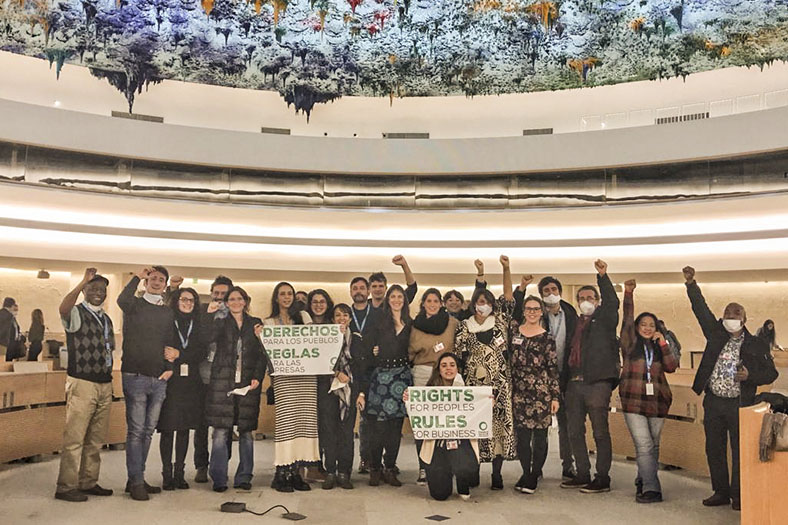 From 25 to 29 October United Nations member states continued the negotiations to elaborate an international Legally Binding Instrument (LBI) to regulate, in international human rights law, the activities of transnational corporations (TNCs) including all entities in their global production chains. This historic process celebrated its seventh session of the Open-Ended Intergovernmental Working Group (OEIGWG) hosted by the Human Rights Council in the Palais des Nations in Geneva.

The UN High Commissioner for Human Rights, Ms Michelle Bachelet, opened the session remarking that the world is witnessing a “growing consensus on the need of binding regulations on business and human rights.”

The UN Binding Treaty – as it is commonly known – negotiations  have taken a qualitative leap forward with a new methodology adopted during this session, bringing transparency and encouraging States to take a position on concrete language of the draft treaty.  A total of 69 States participated during the week. Most importantly, some major and indispensable content was reintroduced and defended by some States, in accordance with the mandate of Resolution 26/9, to close the gaps in international human rights law that enable the impunity of transnational corporations. Of note was the constructive participation of South Africa, Egypt, Palestine, Cameroon, Namibia, Panama and Cuba, among others.

Julia Garcia, from the Movement of People Affected by Dams (MAB) and coordinator of the Global Campaign said “We welcome the fact that many states are discussing direct and clear obligations for transnational corporations and other transnationally active entities, overcoming normative national limitations that contribute to impunity. We wish to highlight the importance of proposals that advocate the expressed inclusion of the primacy of human rights over corporate rights throughout the global production chain.”

As with every year, civil society played an essential role, defending the need for this process, driving its continuity and nurturing it with detailed analyses, strong arguments and concrete content proposals. The Global Campaign to Reclaim Peoples Sovereignty, Dismantle Corporate Power and Stop Impunity (Global Campaign), representing 260 million people globally affected by Transnational Corporations, participated directly in the negotiations, partially resuming the physical presence that last year was not possible due to the COVID-19 pandemic.

“Access to remedy and justice has become a generational struggle rife with obstacles,” stated Joseph Purugganan, from Focus on the Global South and the Asian Task Force on the Binding Treaty. He continued saying that “in the face of the asymmetries of power that pervade in most countries, the protection of affected individuals and communities through the establishment of strong mechanisms of access to justice and reparation must be a priority of this process”.

Hugo Barretto, Trade Unions Confederation of Americas (TUCA) advisor, reiterated  that the Global Campaign is aiming for “an ambitious and effective Treaty with binding rules for transnational corporations and the entities along the global production chains, which play a major role in the climate and biodiversity crises, labour exploitation and historic levels of inequality. Their reprehensible behaviour puts the future of humanity and the planet at risk.”

Raffaele Morgantini, from CETIM and coordinator of the Global Campaign at the UN, explained how, “Some western states and business-representatives repeatedly defend the relevance of the existing voluntary frameworks and even made unsuccessful attempts to suggest alternatives to the Binding Treaty, as part of a strategy, led by the US, to water down the process and foster the adoption of new futile frameworks. Nevertheless, the need to take a significant step forward and find innovative ways to close the legal loopholes that still exist at the international level was overwhelmingly felt during the whole week. It is also worth underlining that several states acknowledged the importance of civil society participation and the value of our proposals.”

However, there are concerns about the risk of  a loss of transparency in the process, as  Erika Mendes, from Justiça Ambiental/Friends of the Earth Mozambique explains, particularly in relation to, “ the immediate future of the negotiations as it continues through the so-called “Group of Friends of the Chair” during the inter-sessional period. The new inter-state negotiation methodology must ensure social participation, so that the voice of affected communities is heard and considered. We urge the Chair and States to protect the process from undue influence from powerful corporate actors who, instead of upholding human rights, lobby for the protection of their own economic interests.”

Fernanda Melchionna, federal deputy of the Brazilian National Congress and part for the Global Interparliamentarian Network (GIN) in support of the Binding Treaty declared, “The struggle for a UN Binding Treaty to regulate the power of transnational corporations and place human and environmental rights above the corporate power of transnational corporations is a strategic and fundamental struggle for the world. The Global Campaign’s role in not allowing countries to remove the essence of the text demonstrates that civil society, affected populations and social movements have a fundamental role to play in the process.”

The Global Campaign continues its commitment to ensure that the UN Binding Treaty process retains the spirit and ambition of Resolution 26/9. To this end, the Global Campaign will continue to mobilise at the national level to ensure that our governments actively participate in these negotiations, representing the needs and aspirations of the social majorities and the peoples of each country.

This round of negotiations is revising the third draft of the binding treaty, published on August 17, 2021, which fits in the negotiation process started in 2014 with the adoption, by the Human Rights Council, of Resolution 26/9. UN information on the Mandate of the OEIGWG.

The global campaign published this statement in September 2021 in response to the release of the third revised draft.

The Global Interparliamentary network in support of the Binding Treaty is a global network of members of National Parliaments and the European Parliament supporting the UN Binding Treaty.

Read the press release on the Global Campaign website.