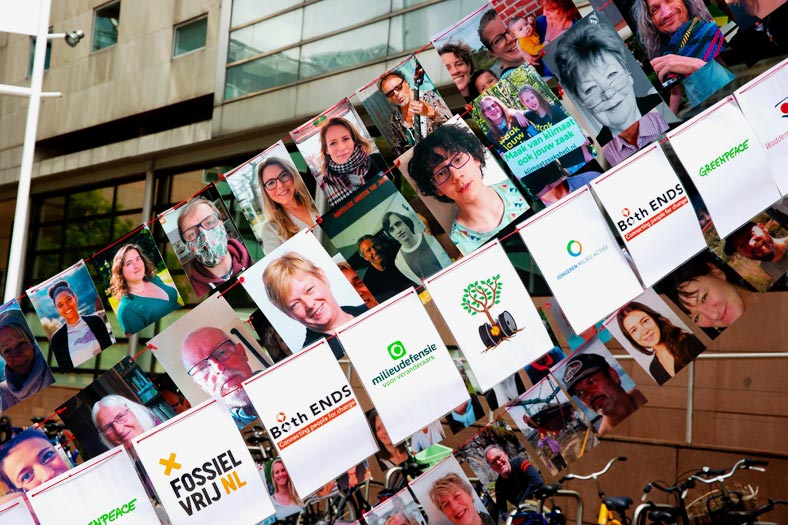 By Donald Pols, Director of Friends of the Earth Netherlands.

In a monumental victory for our planet and climate justice, a Dutch court has held a corporation liable for causing dangerous climate change for the first time.

Shell must reduce its CO2 emissions by 45 per cent within 10 years.
This is a turning point in history. The verdict has enormous consequences for Shell and other big polluters globally.

Today is one of those days when you can dare to hope that people power can actually tackle runaway climate change.

But there are many days when you look at the social and environmental crises in the world and despair – there is so much oppression, environmental destruction and conflict. The problems are so vast, so complex, and embedded in vested interests so powerful that the transformational change needed to address issues like the climate crisis seem out of reach. What is any group or individual to do in the face of such challenges?

Action is always the best antidote to despair. Our Friends of the Earth federation was started 50 years ago, based on the idea of “mobilise, resist, transform” – that a group of friends mobilising together can change the world.

Three years ago we, Friends of the Earth Netherlands, took a huge risk. We decided to take one of the biggest oil corporations in the world to court, demanding not compensation but that they change how they operate to consider the climate.

We only have a few years to keep the global temperature rise below 1.5 degrees and avoid the worst impacts of the climate emergency. People around the world are acting to reduce emissions, but reportedly a mere 25 fossil fuel companies and state-owned entities are responsible for more than half the world’s greenhouse gas emissions. By continuing to extract fossil fuels they are undermining our ability to avoid climate catastrophe.

Shell, a British-Dutch company with headquarters in the Hague, the Netherlands, is one of the biggest climate polluters in the world. Shell continues to drill for oil in Nigeria, and although it claims it will stick to Paris Agreement targets – it’s responsible for a staggering amount of greenhouse gas emissions – it produced 1.38 billion tonnes of CO2 in 2020.
Many people in the Netherlands and around the world want action on climate change. From the outset, we wanted this legal case to be “the people versus Shell”, so we opened the process to the public and some 17,379 Dutch citizens and six organisations joined as co-plaintiffs. Competing with Shell’s deep pockets, the case was completely crowdfunded from the public, mainly in small donations.

Knowing that Shell’s operations and impacts happen worldwide, we decided to focus on its global operations, calling for solidarity from the millions of Friends of the Earth International supporters, who organised hundreds of actions, translated countless press releases, and signed massive petitions. All to help us win the most important battle in the court of public opinion.
Our climate case against Shell is based on similar legal arguments to the historic 2019 Urgenda Climate Case against the Dutch state, in which the Dutch Appeals court created a precedent by ruling that a failure to achieve climate goals is a human rights violation and ordered the state to cut its greenhouse gas emissions by at least 25 per cent by the end of 2020.

We argued that Shell is violating its duty of care and threatening human rights by knowingly undermining the world’s chances of staying below 1.5C. Specifically, we accused Shell of violating Articles 2 and 8 of the European Convention on Human Rights: the right to life and the right to respect for private and family life.

The case is unique because it is the first time a judge has ordered a large polluting company to comply with the Paris Climate Agreement. In her verdict, the judge confirmed that Royal Dutch Shell is causing dangerous climate change. For those of us who have long decried the power of corporations that aids their impunity, the judge’s recognition of Shell’s enormous influence – one that they must now use to fulfil this ruling – was a welcome one. Shell must comply with the judgement immediately, because its current climate policy is not enough, regardless of whether or not they appeal.

Our hope is that the verdict will trigger a wave of climate litigation against other big polluters, to force them to stop extracting and burning fossil fuels. This is in addition to the rising tide of court cases to hold governments to account. The responsibility for stopping the climate crisis is on states and corporations – both have their own responsibilities. One such example is the recent groundbreaking victory in Germany, wherein the top German court declared the Paris Agreement’s 1.5C limit as constitutionally binding, obliging the government to comply and act. It looked at the country’s current climate policy, saw that it simply was not good enough, and called for concrete, accelerated action plans – much like in this case against Shell.

Today is a day for hope – by coming together to demand change we, the people, can win. This is not the beginning nor will it be the end of the long struggle for dignity for all and climate and social justice. In the streets, parliaments and courtrooms across the world, we will continue to stand up to, expose and fight those who are destroying our world.

This article was first published in The Independent on 2 June 2021.