Skip to content
HomeNewsHuman Rights for Peoples, Binding Rules for Corporations: the lessons for the UN one month after the Vale and BHP environmental crime on Rio Doce watershed 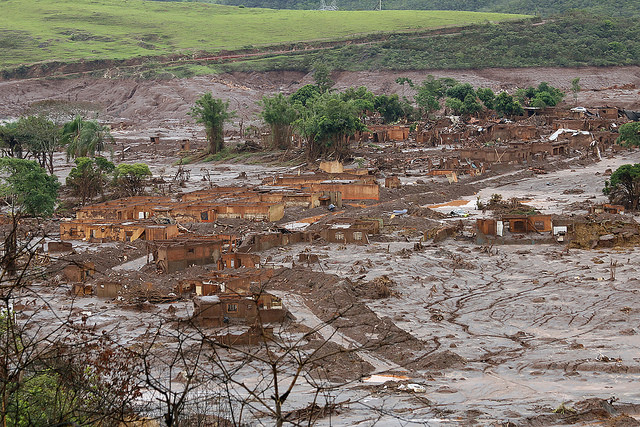 Mining corporation SAMARCO has received awards for its Corporate Social Responsibility, including a national environmental award from the industrial sector of Brazil in 2014. This is shocking considering SAMARCO, owned by the Brazilian mining giant Vale and Anglo-Australian BHP Billiton, has repeatedly escaped blame when implicated for grave environmental damage and associated human rights abuses. For a company like SAMARCO, avoiding these responsibilities is easy; transnational corporations enjoy astonishing impunity.

Back in 2013, Brazil’s Public Attorney published a technical report about the imminent risk of a breach of SAMARCO dams on the Rio Doce basin in Mariana, Minas Gerais. Despite the warning, the corporation has yet to take legal responsibility after the dams collapsed last month, flooding a huge area with waste from its mines, poisoning drinking water for hundreds of thousands of people. The dam collapse and subsequent flooding killed 19 people and displaced hundreds. This is one of the biggest environmental catastrophes in Brazil’s history. The consequent human rights violations are staggering. Yet just as Vale and BHP enjoy impunity and special rights provided by investment protection agreements even if they hurt people and infringe on the rights of nature in many parts of the world, SAMARCO is relatively insulated from responsibility and claims to be taking all possible voluntary measures to ‘help’ the affected population.

Today – UN Human Rights day – more than one month on from the dam collapse, toxic mud has traveled more than 500 kilometers from the mine dams, devastating the river and seriously disrupting access to basic human necessities for the affected population, from the Mountains in Minas Gerais State to the Coast in Espírito Santo. The more than 150 families immediately affected in Sao Bento district, which sadly no longer exists, are still demanding the rights to bury their dead. Meanwhile the corporations involved control and monitor the scene of the crime, using private staff and lawyers to hold private and individual negotiations, maintaining control of both the investigation and the people affected, all with the blessing of the state authorities.

Close to one million people in the river basin were denied the right to fresh water, in the 15 municipalities along the Rio Doce river when the mud paralyzed water systems, meaning bottled water had to be distributed. The fisher folk along the river and on the coast have seen their rights to food and work smashed, probably for many years to come. This has terrible consequences for the food security of the entire local population. Biodiversity as well as traditional and sustainable ways of life, which demand and deserve respect, have been devastated. Ironically, the fisher folk in Spírito Santo have been fighting for decades against SAMARCO’s coastal sand mining, which created fishery exclusion zones. Now they must look for access to justice once again to have their losses compensated.

Vale, another transnational corporation that has collected industrial sector awards for corporate social responsibility (as well as Public Eye’s ‘worst corporation of the year’ award in 2011) is very much known for its systematic and systemic violations of human rights, which have been denounced by an international movement of affected peoples.

In Mozambique, Vale exploits one of the world’s largest reserves of coal in Tete province. Coal, incidentally, is the dirtiest driver of climate change. Vale relocated farmers from their traditional productive lands near the river, where they produced enough to meet most of their own food requirements, into desolate, dry and unproductive areas, depriving people of their right to water, food sovereignty and their cultural memories and traditions, including grave sites and spiritual landmarks.

There have been numerous human rights violations, instances of police brutality and militarization, which have left local people living in fear. The mines have also had negative impacts on the local air and water quality, endangering local people’s health. To make things even worse, for the last year or so there have been sporadic cases of armed conflict in Tete Province between the ruling party and the main opposition party, placing people in further danger.

BHP is one of the multinational companies responsible for the recent environmental catastrophe in Brazil.

And this is not the company’s first corporate crime. The communities in Papua New Guinea are still scarred by the Ok Tedi copper mine disaster in 2001, when tonnes of polluting tailings from the mine entered the Ok Tedi and Fly river systems destroying ecosystems and livelihoods.

BHP is a company who’s business model is fundamentally unsustainable and it is contributing directly to climate change, as one of the worlds biggest coal mining companies and owner of one of the largest coal mine open pits in the world: Cerrejon in La Guajira, Colombia.

Human rights and environmental groups in Australia where the company is based will fight to hold BHP accountable for the harm it causes around the world.  The company’s AGM this year was hit by protests and public outcry.

How can we celebrate Human Rights Day while the same corporations who commit such heinous abuses, not only get to decide their own voluntary responsibilities, but are even celebrated for their inadequate efforts? When transnationals are backed by states, who are captured by corporate interests, and who won’t take the necessary steps to fulfill, maintain and respect human rights, how are they to be held accountable?  Legally binding obligations for corporations plus an international system to hold transnationals accountable and provide real access to justice to the victims of corporate crimes is urgently needed.

This week a UN working group on Business and Human Rights is visiting sites in Brazil where corporations like Vale have violated human rights and are responsible for environmental crimes. On December 11th the group will meet civil society organizations and affected peoples’ movements in the area where the disaster started in Mariana. The working group advocates for voluntary guidelines and principles for businesses, with respect to human rights. The reality of corporate crimes in Brazil and the strength of social movements calling for binding rules and sanctions for corporations in the whole chain of their transnational business should give them a reality check and highlight the UN responsibility to work for a legally binding treaty that puts human rights above corporate profits.