Skip to content
HomeNewsIn solidarity with the Lenca People 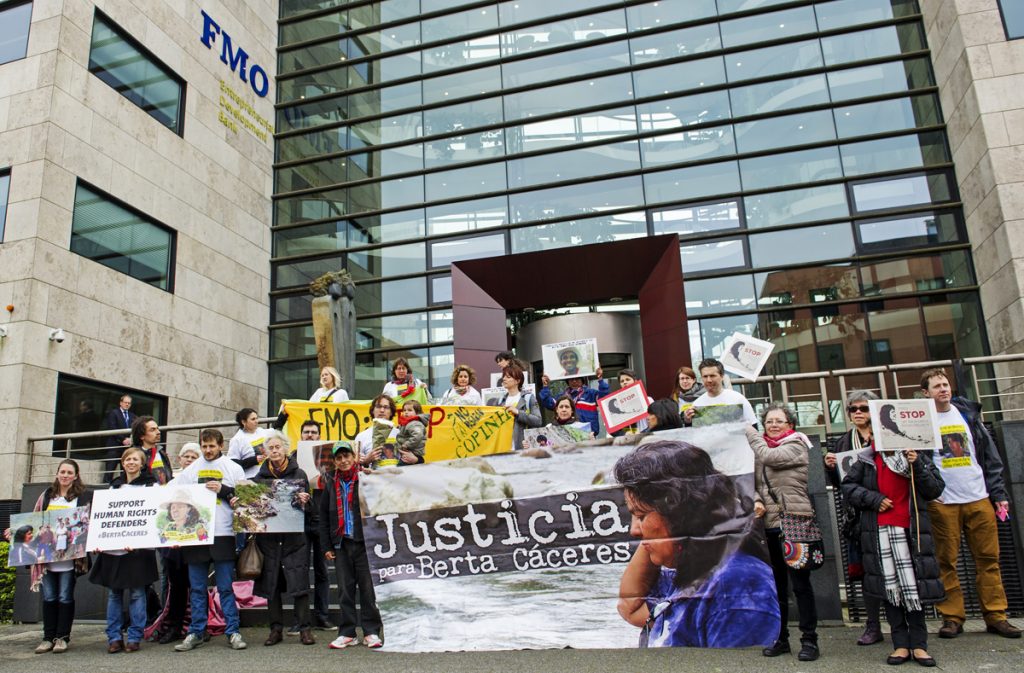 Friends of the Earth Latin America and the Caribbean – ATALC – wishes to express to the international community our rejection of the report delivered by the mission contracted by the FMO (Entrepreneurial Development Bank) related to the construction of the Agua Zarca project in Honduras. We also wish to show our solidarity with the Honduran people in general, and with the Rio Blanco communities in particular, who are legitimately defending their land from threats to their livelihood and their culture, as represented by the construction of hydro-electric mega projects.

The appalling murders of Berta Cáceres, other leaders of the COPINH movement and of nine Movimiento Indigena Lenca de la Paz Honduras – MILPAH leaders, the crimes against the indigenous Tolupan people, students, the murder of over a hundred members of rural organisations in Aguan and the Sula Valley, the high levels of feminicide, massacres of young people, and the high rate of impunity and torture, reflect the consequences of inequitable Trade Agreements with Europe and the United States. Militarisation and drug trafficking, among other imposed realities, reflect the dangers faced by activists and social leaders who are defending their rights in a situation where there are questions relating to the companies’ violations of financial, social, environmental and territorial human rights.

For this reason, we consider it unacceptable that the reports submitted by the financial backers of the development projects should resort to discrediting the actions taken by the communities and their social movements, in order to try and legitimise the impositions made by companies which are financed by foreign bank capital. We condemn these plans, like those endorsed by FMO with the mission, which further victimise the communities and processes, and increase the risks for their collective territorial security by creating conditions which prevent the truth being uncovered, justice being applied, full compensation and guarantees that the violence suffered in the past will not be repeated.

In agreement with the statement by Victoria Tauli-Corpuz, the United Nations Special Rapporteur on Indigenous People, we consider the Rio Blanco case emblematic for what it represents in terms of violence, impunity and the lack of access to justice for the people of this Mesoamerican country. We therefore request, respectfully and categorically, that the Honduran State amplifies and concretises its lines of investigation into all of the irregularities that have taken place in relation to the imposition of these megaprojects. We also request that the Honduran State does not promote steps backward due to tactics like the preparation of reports like the FMO one detailed above, which also ignores the potential future responsibilities of these megaprojects’ financial backers. We also call on the Netherlands, Finland and Spain – country – headquarters and majority shareholders of the financial backers of Agua Zarca and other dams in Honduras – in accordance with their extra-territorial obligations, to stop financing projects which breach human rights in Latin America.

Furthermore, we regret and condemn the theft of the file containing the judicial details of the murder of Berta Cáceres, a crime which took place amidst unclear events a few weeks ago in Tegucigalpa. We consider that a situation of this type represents a serious obstruction to justice.

Accordingly, we demand justice from the competent Honduran authorities and urgency in finding the perpetrators of these incidents, in this way making it possible to uncover the truth and apply the corresponding sanctions for the murder of Berta Cáceres and all the Lenca and Tolupan leaders, peasants, women and students who have greatly influenced the social and spiritual conscience of the Honduran people and all the people in the world.