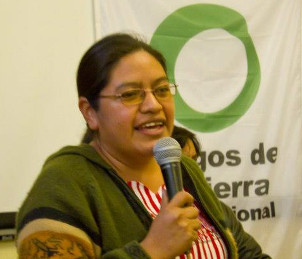 The cases of resistance visited by the mission in Guatemala included: the resistance against Marlin mine, owned by Canadian corporation Goldcorp in San Miguen Ixtahuacán municipality; the situation of the political prisoners of Santa Cruz Barillas who were arbitrarily arrested in May of 2012 for resisting the building of a hydroelectric dam owned by Spanish corporation Hidralia SA, and finally the resistance of the residents of San José del Golfo to the installation of Exmingua mine, owned by Canadian Radius Gold Corporation.

The delegates of the mission in El Salvador were informed in detail about the struggle of the Environmental Committee of Cabañas department to avoid the installation of a gold and silver extractive project in El Dorado by Canadian corporation Pacific Rim.

The representatives of the environmental federation included the chair of Friends of the Earth International, Jagoda Munic from Croacia, as well as delegates from the Philippines, Spain, Argentina, Brazil, Uruguay, Honduras, Colombia, Costa Rica, El Salvador, Guatemala and Sweden.

“After talking with the affected communities, there is a feeling of sadness and outrage because of the situation they are going through”, said FoEI chair, Jagoda Munic.

She expressed international solidarity with the struggle of the communities affected in Guatemala and with the defense of human rights, and affirmed Friends of the Earth International’s responsibility to continue supporting the resisting communities.

“The communities that are resisting have been accused of terrorism. We have been able to verify that, far from it, they are defending their territories and their livelihood”, said Jagoda Munic.

Lastly, Jagoda Munic condemned the arbitrary detentions of the leaders of the resistance and said the international community will be waiting for the outcome of the hearing to be held next November 26 by the Guatemalan judiciary, where a decision regarding those who are still detained over the case of Santa Cruz Barillas will be issued.

Meanwhile, the chair of Friends of the Earth Spain, Victor Barro, said “The investment in Latin America by corporations that claim to be Spanish, like Hidralia SA, Telefonica, Union Fenosa and Aguas de Barcelona has caused socio-environmental conflicts and human rights violations. These actions ensure the perpetuation of the European way of life, which is currently in crisis and affects more and more people in both regions. A proof of this was the general strike recently held in Europe”.

Barro also expressed the message given by the political prisoners he visited at the prison of Region 18 in Guatemala City: “The company should leave our families alone and they should get out of our territories”.

Meanwhile, Danilo Urrea, of Friends of the Earth Colombia (CENSAT) talked about the different cases of resistance visited during the mission. “We are witnessing a structural crisis of the extractivist and patriarchal model caused by the breaking of relations between society and nature. This is shown in the territorialization of capital and the financialization of nature, which leads to displacement and human rights violations”.

Danilo added “Colombia is an example of the criminalization of the protests and the struggle through laws and through the militarization of the territories all over Latin America. The disappearance of leaders and the displacement has become one of the strategies used by the corporations to dismantle the struggle and to take over territories”.

Lyda Forero of the Transnational Institute said the Permanent Peoples’ Tribunal that gathered between 2006 and 2010 heard many cases of corporations that violate human rights in Central America. “Two years later, we verify that the human rights violations exposed before the Tribunal continue and are getting worse”.

The delegates of the international mission said the economic and ecological crimes committed by transnational corporations in the case of Marlin and Barillas mines in Guatemala and of Pacific Rim in El Salvador are symptomatic of global systemic problems.

They also exposed the crimes committed by transnational corporations with the complicity of governments (which adopt laws in favor of corporations even above community rights) by way of international trade or investment treaties.

The delegates of the international mission called on the European Members of Parliament to reject the Partnership Agreement between the European Union and Central America in order to prevent Europe from becoming an accomplice of the crimes committed by transnational corporations in Central America.

The European Parliament is about to ratify the Partnership Agreement between the EU and Central America on December 11 to 13.

The delegates of the mission were clear that transnational corporations are confronting communities and dividing families through the transfer of funds and misleading advertising as part of their corporate social responsibility strategy.

The mission expressed the need to end the impunity of transnational corporations in Central America.

It also expressed the need for transnational corporations to leave the affected territories and compensate the impacted communities.

It also called for the release of the political prisoners who were criminalized for civil resistance, and in the case of El Salvador, they called for the clarification of the murders and persecutions committed against environmental activists, with all the legal and ethical guarantees.

The international mission will write a preliminary report of its actions to be circulated soon.