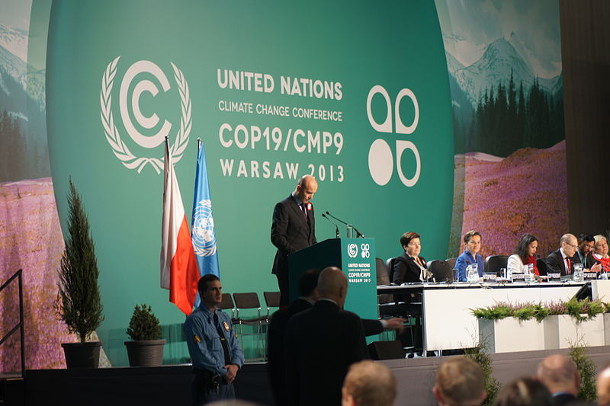 WARSAW, POLAND, November 15, 2013 — Friends of the Earth International today strongly denounced the Japanese government which stated at the UN climate talks that it is breaking its promises to reduce climate change-causing greenhouse gases. [1]

Japan is the world’s fifth largest emitter of greenhouse gases.

“While the planet is hurtling towards catastrophic climate change, and thousands are dead due to Typhoon Haiyan in the Philippines, Japan announced it will not reduce its carbon emissions as much as previously promised. This Japanese announcement flies in the face of the scientific evidence recently released by the Inter-governmental Panel on Climate Change,” said Dipti Bhatnagar, International Coordinator of the Climate Justice & Energy programme, Friends of the Earth International.

“Tokyo’s announcement comes as a slap on the face of the planet and the people. We are sorely disappointed at the continuing deterioration of the talks that this represents. Japan has today made a mockery of the Southern countries who expected to hear that rich countries like Japan cut their emissions”, she added.

“Today’s decision was made without involving the broad Japanese public and comes at the time when people in Southern countries are suffering from severe climate-related disasters”, said Yuri Onodera from Friends of the Earth Japan.

“The government of Premier Abe should reconsider and reverse the course. Under the current UN system Japan can reconsider and increase its emissions reduction target,” he added.

“The world urgently needs ambitious emissions reductions. Instead, industrialised countries are now going backwards after dragging their heels for two decades. This is unacceptable,” said Jagoda Munic, Chair of Friends of the Earth International.

Rich countries have produced 75% of historic greenhouse gas emissions despite only having 15% of the world’s population.

The UN climate talks are supposed to be making progress on implementing the agreement that world governments made in 1992 to stop man-made and dangerous climate change.

The agreement recognises that rich countries have done the most to cause the problem of climate change and should take the lead in solving it.