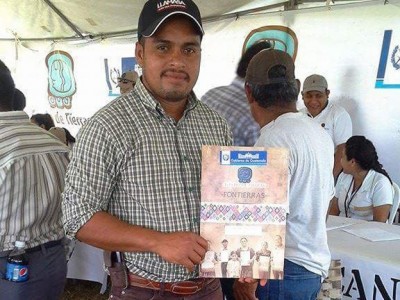 Rigoberto was a 28-year old schoolteacher and indigenous activist. He was shot outside of a courthouse just one day after a court ordered the palm oil company to suspend operations due to a huge spill of palm oil waste. He had been among the first to report a massive fish die-off from the polluted water.

The spill killed hundreds of thousands of fish, putting at risk the livelihoods of thousands of people in riverside communities. Experts call it an “ecocide” and among the largest single environmental disasters in Guatemalan history. Rigoberto did the only responsible thing by reporting and denouncing the spill — a heroic action in a country where many activists are killed each year

The recent spill is just one example of the ecological destruction that large-scale palm oil can cause, especially when governments neglect their duty to protect people and the environment. When the company’s processing plant overflowed, local communities were never warned, and were left on their own to take protective measures.

Rigoberto documented the spill and then personally filed a complaint, prompting a court order to cease operations. Rather than upholding the court order, the Guatemalan government allowed Rigoberto to be killed for his activism.

It is absolutely unacceptable that activists like Rigoberto put their lives at risk when they stand up to big polluters. We cannot stand for this. We must demand justice for Rigoberto now.

The petition is now closed.