Central Lima shut down by march for climate justice

Over 20,000 people flooded central Lima calling for "Climate Justice Now!" in the largest demonstration the city has seen since 2010.

Local trade unions, women's groups and student associations were joined by campesino and indigenous peoples' from across Peru to highlight the devastating impact that climate change is already having on food and water in the country.

International activists marched in solidarity with the locally organised march, and echoed the demands for climate justice.

"The demand of this march is not a deal at the UN, but a deal at the UN that actually includes the rights and needs of impacted people. If there is no justice, there is no deal." said Dipti Bhatnagar, coordinator for Climate Justice and Energy at Friends of the Earth International. 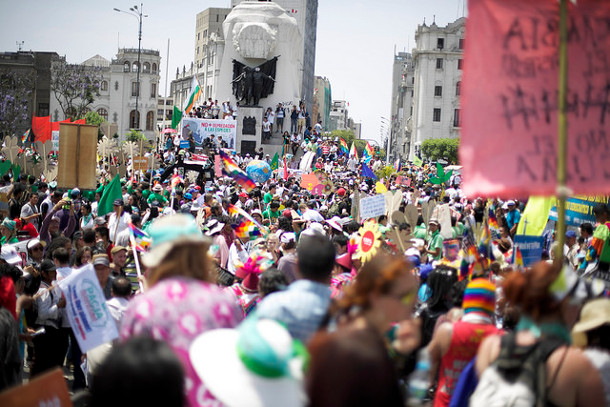 "The movement to end the fossil fuel age that has been based on ceaseless extraction, pollution and dispossession of local communities is only growing stronger. Workers, indigenous peoples, women, youth and environmental activists are linking together to forge new societies and energy systems that put people and the planet first, over corporate greed." Bhatnagar said.

"If the UN process does nothing to speed that transition, if it does nothing to drastically change our climate course in the immediate pre-2020 period then it will be deliberately ignoring the will of the people taking to the streets."

Inside the official UN venue Ministers are meeting today to discuss increasing current climate action and a future climate agreement.
Lidy Nacpil, a leader of Jubilee South Asia Pacific in the Philippines, made a joint presentation to the Ministers on behalf of registered observers from trade unions, environmental NGOs, womens, and youth groups.

Nacpil said: "The conference is not over – there is still time to show this commitment, to show that you listen to your people,  to show that you do hear the almost twenty thousand people marching in central Lima today. You can still take a decision here to see climate change as more than just emission cuts but also about  the rights of women and men. You can still take the decision to include adaptation, finance and technology as mandatory elements of your contributions to the future agreement."

The UN talks are scheduled to conclude on Friday, with observers tipping them to go over time and run until Saturday as countries still do not agree on the scope of the future climate agreement.

> The UN Declaration on the rights of peasants as a tool for p...