How combined political will, people power and shared knowledge can make Agroecology a reality

A delegation from Friends of the Earth International was present at the 7th International Meeting of Agroecology, Sustainable Agriculture and Cooperativism in Cuba, 17-23 November 2019, organized by the National Association of Small Farmers of Cuba (ANAP), member of La Via Campesina. This was the first time representatives from all regions of the federation gathered to discuss Agroecology under the Food Sovereignty program.

The high point of the encounter was the first three days, during which teams of participants visited 37 farms in 17 municipalities across Artemisa, Mayabeque and Havana provinces. The farms belong to six Farming Production Cooperatives (CPA) and 12 Credit and Services Cooperatives (CCS), out of the 3315 that exist within ANAP.

CPAs farm parcels of private land collectively, while CCSs bring together several small-scale producers for better terms in credit, market access and organization. ANAP counts 858 CPA and 2457 CCS as members. In addition, there are 4078 cooperatives incorporated into the Basic Units of Cooperative Production (UBPC), served by the Union of Agricultural Workers (Sindicato de Trabajadores Agropecuarios).

“In Cuba, peasant pride brings culture and identity and peasants are aware of their key role in feeding the country” 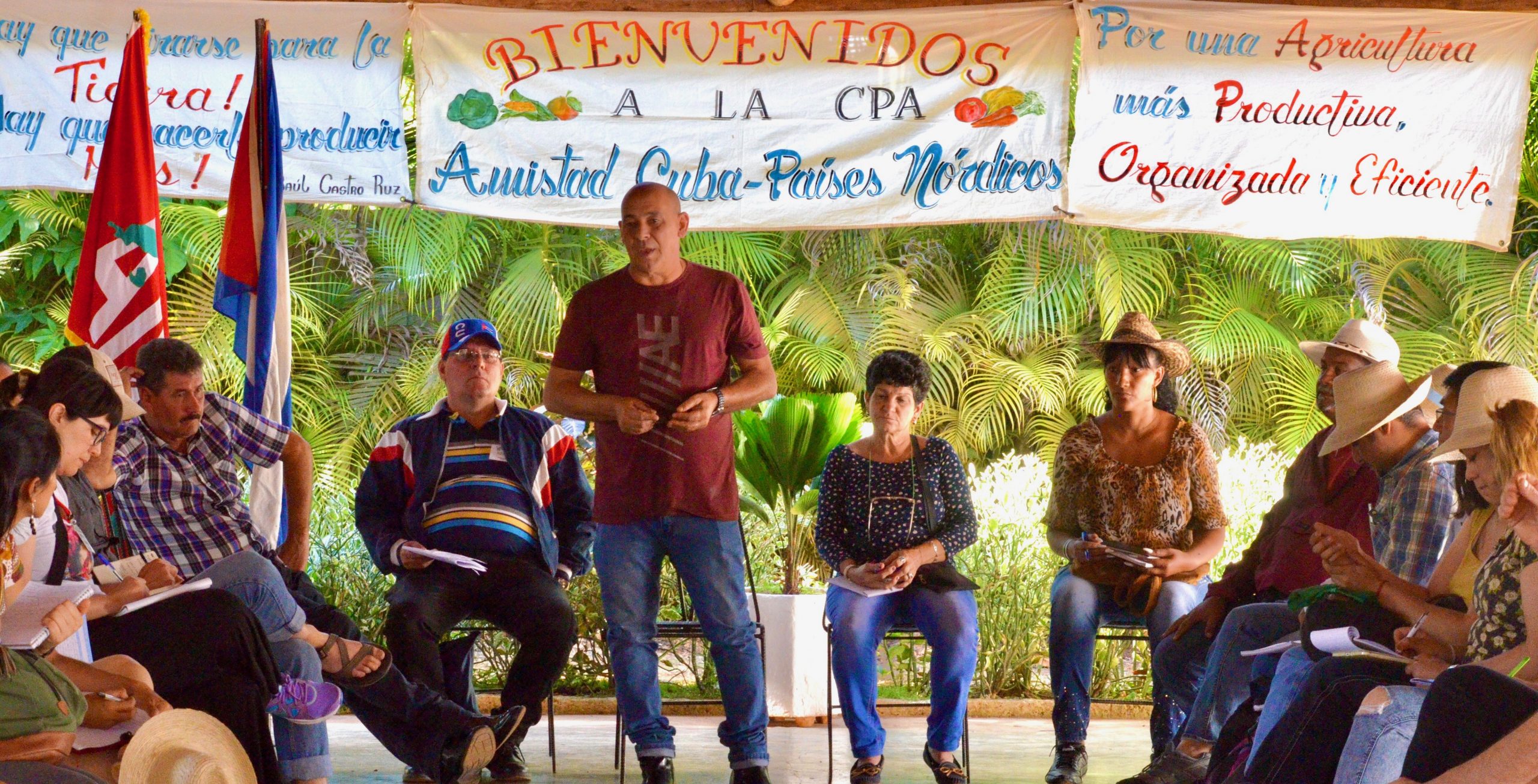 These farm visits were a huge learning experience for the whole delegation. We saw many elements of our vision for Food Sovereignty and Agroecology being practiced, including ecological harmony, land reform, putting life before profit and very sophisticated social and political organization.

“So much to learn about Agroecology. This term is not only representing science in Cuba and in Latin America, it is also about policies and politics of food production, marketing, and providing healthy affordable food for people. It was just eye opening for me. The production and distribution model is such that there isn't competition with transnational corporations”

Our delegation was made up of people from Friends of the Earth member groups across our four regions, the international coordinators of the Food Sovereignty program and some members of its Steering Group (from Nigeria, Honduras and Europe). 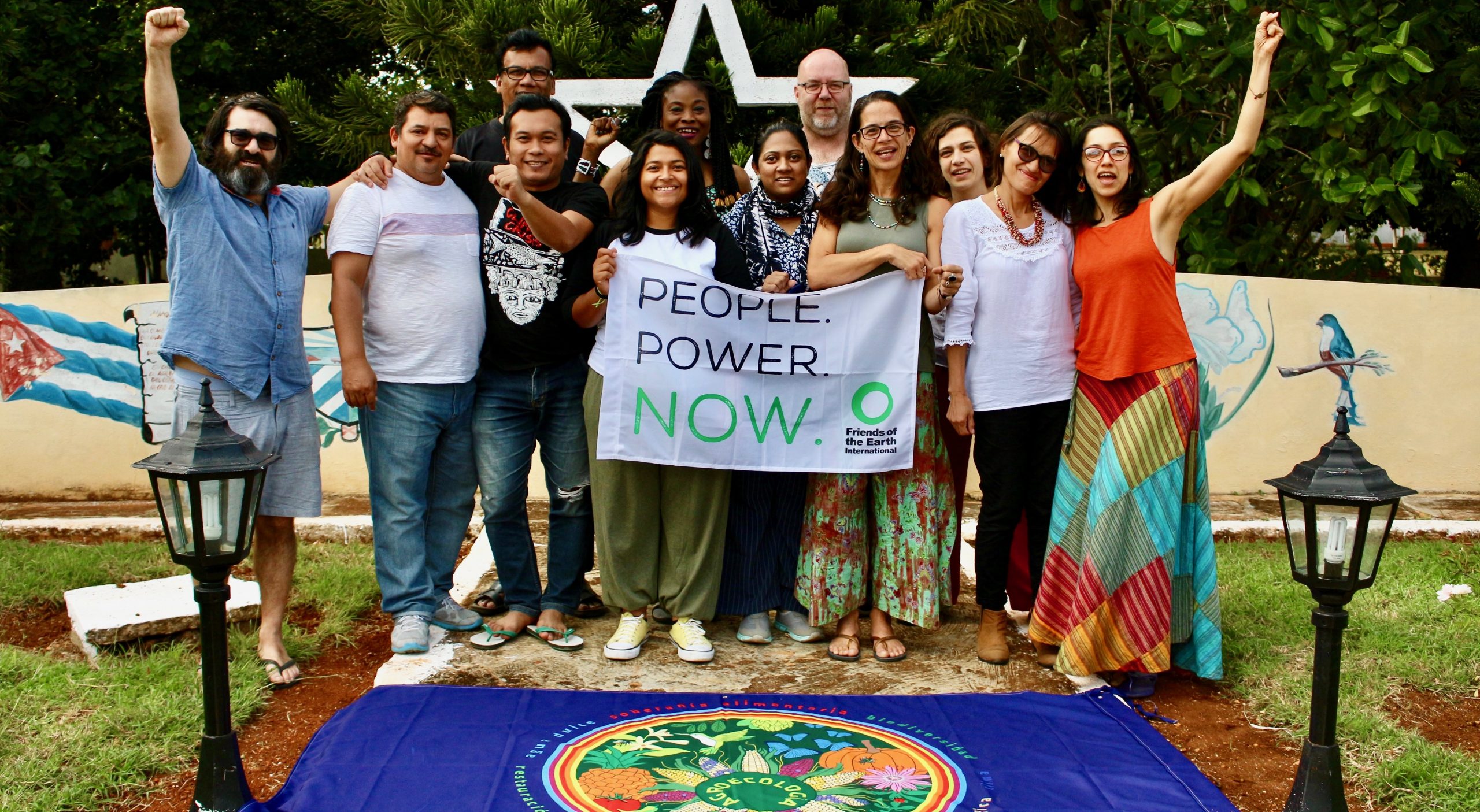 The 7th Meeting took place in Güira de Melena, Artemisa province, from 17-23 November. 200 delegates from 31 countries participated, including members of peasant and environmental organizations, several of them from La Via Campesina. They attended panels and conferences on environmental, social and economic sustainability in agroecological farms; experiences in the promotion of Agroecology across the world; and actions by the Cuban government to comply with the 2030 sustainable development agenda, with special emphasis on climate change mitigation and the effects of the economic blockade on Cuban agriculture.

Some of the 37 farms we visited  have 100 % agroecological certification, while others are applying for the certification but already implement agroecological practices in most of their production. Others are starting to make the change. Most of the farms are family farms: the harvested crops are used for self-sufficiency and sold to the cooperative to which they belong. Peasants produce 65% of the food consumed in Cuba.

Friends of the Earth International's delegation felt that these visits were an inspiring experience, which reaffirms the role of Agroecology as a systemic solution to achieving Food Sovereignty.

One of the keys to making the transition towards Agroecology is State support, through the design of a huge number and variety of public policies that operate at different governmental levels (national, provincial and municipal). These include:

“The implementation of this model is based on the collective building of knowledge, participation and commitment to feeding the people by small-scale producers, with the support of public policies"

Cooperatives have a real impact on the community: farm produce supplies children’s centers, schools, elderly homes and hospitals, among other institutions; and also covers hotels and restaurants, ensuring the supply for this important sector of the Cuban economy. At the beginning of each year, each CCS and CPA plans the harvest in terms of the amount of fruit, vegetables, grains, legumes, seeds, meat, eggs, milk and honey that will be necessary to meet the country’s needs. Some cooperatives also have processing production plants, called “mini-industries”. One example is the “Pica Pica” farm in Antonio Maceo CCS in Mayabeque, where fruits such as guava are processed into cans which are then sold at their own “sale points”, without intermediaries intervening in the price of the product.

“We are impressed with the level of social and political organization that allows for the development and expansion of Agroecology, through farmers who achieve much diversity at a small-scale”

Various farm visits included exchanges with the Assessment Assemblies that are taking place ahead of the 12th Congress of ANAP in 2020.

In order to ensure the inclusion of women and youth in agroecological production, in the past decade the Enlace Cooperativo project (developed between the Cuban government and European cooperation) conducted participatory assessments in several cooperatives in the municipality of Contramaestre, province of Santiago de Cuba. Through surveys and interviews with both women and men, they identified certain roles based on gender stereotypes (who does what and who makes what decisions) and how to plan the changes needed for gender equality and equal opportunities (what they want to achieve, how to achieve it, who does it, how much it costs, how long it takes, and expected outcomes). 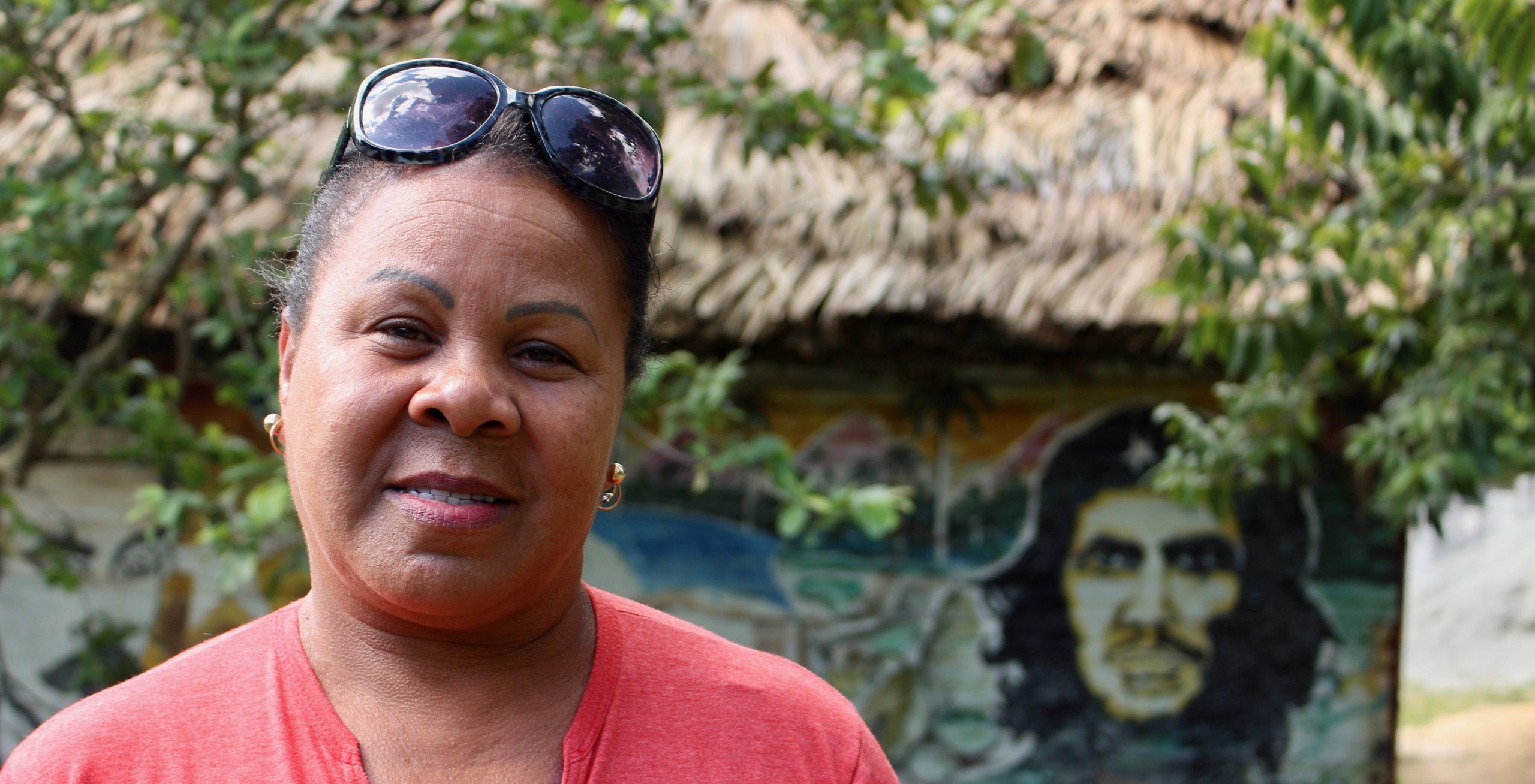 While these are recent initiatives, ANAP promoters expect to replicate them around the country to ensure increased participation of women in hierarchical decision-making roles (such as presidents of CPAs and CCSs), although many women already hold positions that are crucial to the sustainability of cooperatives, such as directors of grassroots organizations, accountants or agroecological promoters and facilitators. In ANAP, more women are also expected to become “land owners”, and thus able to make decisions about resources, and to redistribute domestic and care work.

“Everything we talk about in our federation’s Food Sovereignty program is a reality here: that the agents of change are peasants; that we need strong agroecological peasant production with State support - including scientific institutions creating inputs such as efficient microorganisms for pest and disease control. We know that conventional agriculture is not the solution. On the contrary, it only generates poverty, soil and biodiversity loss, and water pollution. We are leaving with new energy and strength to drive forward change in our own territories”

There are currently 414,000 cooperative farmers. If we also count their families, they reach 3 million people. Agriculture generates jobs for 25% of the economically active population of Cuba. This goes hand in hand with the National Environmental Strategy which stresses climate change mitigation, through reduction of greenhouse gas emissions and addressing impacts, such as hurricanes and droughts. Agroecology plays a key role in cooling the planet.

In turn, Agroecology is a key tool in resisting the economic, commercial and financial blockade imposed on Cuba by the US government (despite the 28 resolutions approved at UN level demanding the end of these illegal and restrictive measures.) The prohibited access to international credits and laws that criminalize those who bring fuel to the country imply a resource deficit and impose energy savings.

60 years after the Agrarian Reform law, passed after the 1959 Revolution, local food production has managed to adapt and became agroecological production, facing up to an “organic war” which saw the introduction of pests and diseases in raw materials. 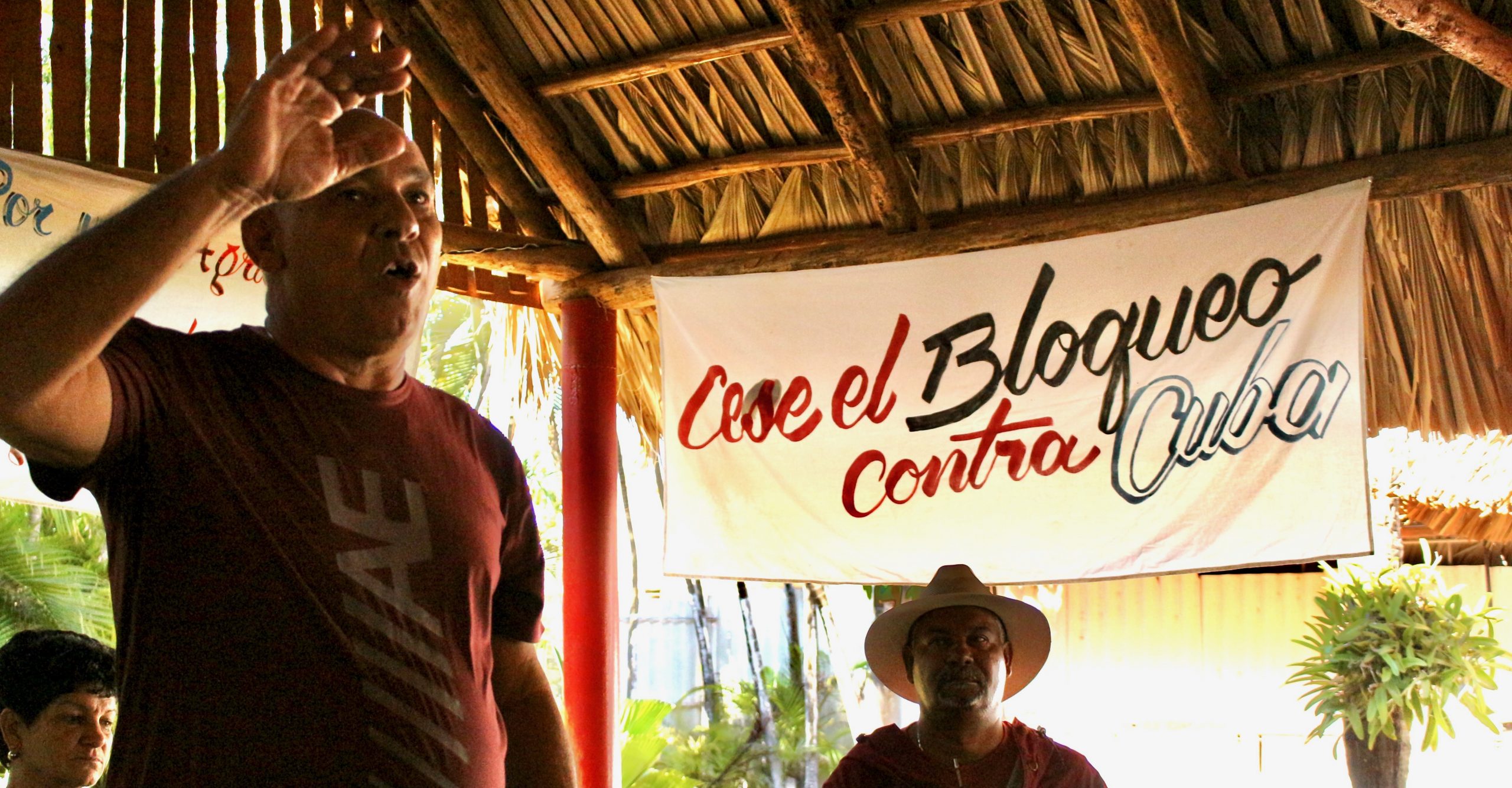 At the end of the 7th Meeting, a declaration was approved on behalf of La Via Campesina delegations that condemns and demands the immediate end of the US blockade on Cuba and against the repression of Bolivian, Chilean and Colombian peoples, reaffirming the spirit of internationalism and solidarity among organized peasants.

Being able to participate in this meeting, exchanging opinions and experiences with guajiros (Cuban peasants) about their farms and cooperatives  with social organizations from around the world, allowed Friends of the Earth International to reaffirm that: Agroecology is a system of life that, with the support of public policies, can feed the whole world in a healthy way, and with social, economic, environmental and gender justice.