On World Food Day, a new report from Friends of the Earth International finds that current strategies to raise investment in agriculture are most likely blocking rather than aiding the achievement of food security and food sovereignty.

One key reason is that trade and investment agreements focus on attracting agribusiness investments and are geared towards generating profits for them. This is being done by using these agreements to open new markets for agribusinesses and including clauses in them that give comprehensive protection for agribusiness’ profits, even when this comes at the cost of States and peoples welfare. Agreements under negotiation such as the Transatlantic Trade and Investment Partnership (TTIP*) and Trans-Pacific Partnership (TPP**) as well as some major aid programmes undermine the sovereignty of states and hinder their ability to develop their own agricultural economies and food sovereignty.

* TTIP: Transatlantic Trade and Investment Partnerships is a proposed free trade agreement, in negotiation, between the United States and the European Union. Laws that check our foods are safe or minimise the risk to people or the planet could be compromised if TTIP goes ahead. Europe's food production and many of our laws are often stricter than in the USA. Yet big business wants food products currently banned in the EU, but on sale in America, to automatically be allowed in Europe through TTIP.

** TPP: Trans Pacific Partnership is a trade agreement among twelve of the Pacific Rim countries - notably not including China. It is currently awaiting ratification to enter into force. The TPP contains measures to lower both non-tariff and tariff barriers to trade. TPP would set new terms for trade and business investment among the 12 Pacific Rim nations — a far-flung group with an annual gross domestic product of nearly $28 trillion that represents roughly 40 percent of global G.D.P. and one-third of world trade. 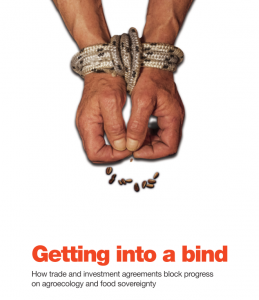 Here you can find the English report

Here you can find the English Booklet version

Publisher: Friends of the Earth International