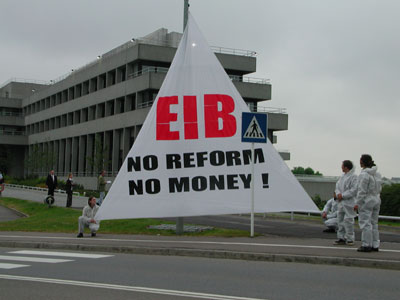 June 4, 2002 – NGOs protested today in Luxembourg at the European Investment Bank (EIB) Annual General Meeting to express their discontent with the EIB’s unwillingness to adopt reforms. The protesters carried banners with the slogan EIB: NO REFORM – NO MONEY! and demanded that the EIB’s capital increase be conditioned on major reforms in the Bank. It may have been the first action of this type that the EIB has experienced. However, it won’t be last if the Bank continues to resist reform.

The decision of the EIB capital increase by EUR 50 billion was due to be taken today. Given the EIB’s failure to truly implement even the most basic reforms, more than 30 environmental organizations and other civil society groups from all over Europe have been calling on the 15 EU member states – which own and ultimately govern the EIB – to condition the increase on substantial reforms in public access to information, environmental standards, a proper development mandate, and appropriate supervision by EU institutions.

“We are here today because we believe that with the EIB’s request for a capital increase, the 15 member states have an unique opportunity to reform the Bank. The EIB lags behind most other financial institutions in the world,” said Magda Stoczkiewicz, who is coordinating the EIB campaign on behalf of CEE Bankwatch Network and Friends of the Earth International.

The NGO coalition has prepared a detailed rationale of the needed reforms, along with several new case studies showing the EIB’s deficiencies regarding projects in and outside of the EU. In each of these cases, the EIB decision was made without proper environmental assessments or public consultation.

“The EIB should not get a blank check anymore and it is not only NGOs who are saying this. The EP resolution of May 16 calls for conditioning the capital increase on adopting binding environmental and social guidelines and transparency of the decision making process,” says Stoczkiewicz. “Proper access to information and clear rules on public participation are the basics the Bank must adopt in order to truly step into the 21st century.”

“EIB activities have expanded enormously both inside and beyond the EU,” said Peep Mardiste from FoE Estonia. “We have a clear interest in making sure that it has proper environmental and social standards, as well as appropriate safeguard policies in place to deal with the realities in countries outside the EU.”

“We know of a couple of governments who ask for more transparency and clearer governance structures for the EIB, for example the Italians” observed Martin Koehler from the Italian Campaign to Reform the World Bank. “Unfortunately, the Italians did not put such demands as conditions to the approval of the capital increase. If I think at the recent scandal which involves corruption in the EIB financed oil extraction project in the Italian region of Basilicata, I don’t know what other needs to happen to underline the urgency of reforms. We need more transparency and standards in the consultations with local communities in project decisions which touch their lives.”

The campaign EIB: NO REFORM – NO MONEY! is led by Friends of the Earth International and CEE Bankwatch Network and supported by more than 30 groups all over Europe.