Skip to content
HomeNewsNovember 10: A significant day for activists working against mining, oil and gas 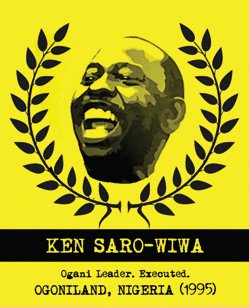 Friends of the Earth International commemorates Ken Saro-Wiwa’s death on November 10 as a day of solidarity with victims of mining, oil and gas activities around the world and a celebration of all the activists who continue to resist.

Ken Saro-WiwaSeventeen years ago, environmental activist Ken Saro-Wiwa and eight others were executed under the Abacha dictatorship in Nigeria.

It was widely alleged that oil giant Shell interfered in the trial that led to his death sentence. Shell has been drilling in Nigeria for 50 years and its operations in the Niger Delta continue to have massively negative impacts on the population there.

Friends of the Earth International commemorates Ken Saro-Wiwa’s death on November 10 as a day of solidarity with victims of mining, oil and gas activities and a celebration of the activists who continue to resist.

Since the release of the 2011 report ‘Memory, truth and justice for heroes’ (1) the death toll and level of persecution of community leaders defending their territories against abuses by the extractive industries has continued unabated. (2)

The destruction of communities and ecosystems caused by extractive industries has generated a global resistance movement struggling for justice and the defense of life, land, resources, biodiversity, livelihoods and cultures.

This year Friends of the Earth International marks this anniversary during its biennial general assembly in El Salvador in November by reflecting on its work with environmental defenders across the globe.

Fifteen international delegates will visit communities negatively affected by mining in Guatemala and El Salvador as part of a solidarity tour following the general assembly, from 13-20 November. (3)

Friends of the Earth International reiterates its support for communities resisting destructive extractive projects, in their struggles against social injustices, and in bringing about environmental and economic justice.

On 11 October 2012, Friends of the Earth and four Nigerians brought Dutch oil giant Shell to court in The Hague for damage caused in Nigeria; a milestone in the decades of struggle of the people of the Niger Delta and a fitting testament to the struggle of Ken Saro-Wiwa. (4)