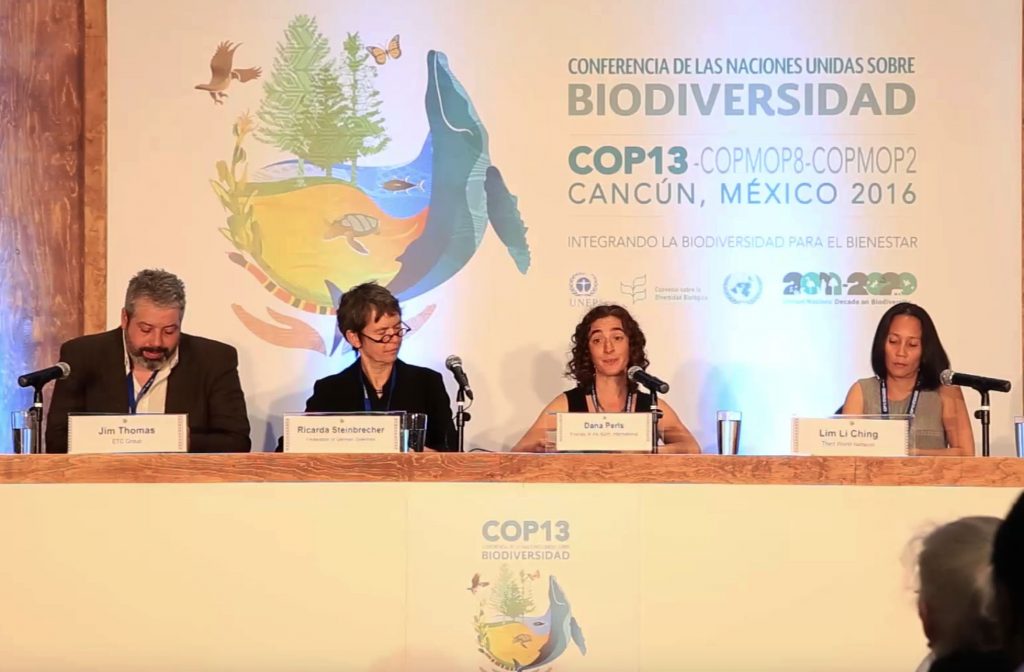 On December 5th, international conservation and environmental leaders, including Friends of the Earth International called on governments at the CBD COP 13 to establish a moratorium on the controversial genetic extinction technology called gene drives.

Common Call for a Global Moratorium on Genetically-engineered Gene Drives

In view of the significant ecological, cultural and societal threats posed by genetically-engineered gene drives, including threats to biodiversity, national sovereignty, peace and food security, we the undersigned call upon governments at the 13th Conference of the Parties to the Convention on Biological Diversity, in accordance with the precautionary principle, to put in place a moratorium on:

Gene drives, developed through new gene-editing techniques, are designed to force a particular genetically engineered trait to spread through an entire wild population – potentially changing entire species or even causing deliberate extinctions. The statement urges governments to put in place an urgent, global moratorium on the development and release of the new technology, which poses serious and potentially irreversible threats to biodiversity, as well as national sovereignty, peace and food security.

“We lack the knowledge and understanding to release gene drives into the environment – we don’t even know what questions to ask. To deliberately drive a species to extinction has major ethical, social and environmental implications,” says Dr. Ricarda Steinbrecher, representing the Federation of German Scientists and EcoNexus. “It is essential that we pause, to allow the scientific community, local communities and society at large to debate and reflect. We can’t allow ourselves to be led by a novel technique. In the meantime, a moratorium is essential.”

“These genetic extinction technologies are false solutions to our conservation challenges”, said Dana Perls, member of the Friends of the Earth delegation at the COP 13. “We want to support truly sustainable and community driven conservation efforts. Gene drives could be co-opted by agribusiness and military interests. We need a moratorium on irreversible and irresponsible technologies such as gene drives.”

“Gene drives will be one of the fiercest debates at CBD this year”, says Jim Thomas of ETC Group. “Gene drives are advancing far too quickly in the real world, and so far are unregulated. There are already hundreds of millions of dollars pouring into gene drive development, and even reckless proposals to release gene drives within the next four years.”

“The CBD is the premier international treaty for protecting biodiversity and life on earth from new threats”, said Lim Li Ching of Third World Network. “It is within the mandate of the CBD to adopt this moratorium, and countries that are party to this agreement must act now to avoid serious or irreversible harm.”

Call for a moratorium and the list of signatories
Additional organizational signatures can be sent to: trudi[at]etcgroup.org

“The Case for a Global Moratorium on Genetically-engineered Gene Drives”, produced by the Civil Society Working Group on Gene Drives, in which FOEI is participating