Chair of Friends of the Earth International Jagoda Munic reflects on the international solidarity mission to Palestine.

Wednesday, October 9, 2013
Here we are, past the passport control at Ben Gurion airport in Tel Aviv. A group of friends meeting together in Jersulam and, more officially, Friends of the Earth International’s delegation on a solidarity trip to Palestine, where we are going to learn more about and support PENGON / FoE Palestine’s work. Our group includes ExCom members Daniel Ribeiro from Mozambique and Elaine Gilligan from the UK, along with Real World Radio Coordinator José Elósegui from Uruguay, International Coordinator Dave Hirsch and International Membership Development Coordinator Erick Burke, both from the USA. And me, of course, Jagoda Munic, from Croatia, the chairperson of FoEI. It is night and by the time we reach Jerusalem, there is nowhere open to eat dinner, so we had to go for a quick drink to catch up with each other and share information about the mission.

Thursday, October 10
It took some time to get to Ramallah from Jerusalem, although they are not so far apart, indeed they seem to be part of the same city. But one check point was closed, so we had to turn around and find another on the heavily congested road. This is normal here. The check points are at the entrances to all cities in the West Bank. Israeli soldiers check everyone who passes.

For an outsider, it may seem that the West Bank is under the control of the Palestinians, but very soon one finds out it is not. Indeed, only 17.7% of the area – all in the cities – is under Palestinian control, while the rest is controlled by the Israeli army. This is based on the Oslo Interim accords from the 1990s, which divided the West Bank into three areas of control, giving the Palestinian Authority control over 17.7% (Area A) and partial administrative control of a further 18.3% (Area B). The remaining land (60.9% Area C and 3% nature reserve) is under Israeli military and administrative control, as is the entire border.

Read the Friends of the Earth International report on the environmental consequences of the Israeli occupation.

Because of the road blockade, we had to rush to our meeting in the office of the Palestinian Hydrology Group, one of the 15 member groups of PENGON or Friends of the Earth Palestine.

Here we had a presentation by Dr. Abed EL Rahman Tamimi about the Palestinian Environment, describing the main environmental problems like land grabbing, water shortages and cut offs, uprooting trees, toxic waste-dumping and air pollution, all linked to the Israeli occupation as the root cause of these problems.

Perhaps the biggest problem is water shortage and accessibility. Dr. Tamimi points out that the water is under the domain of the Israeli Ministry of defense and that the main reason that Israel has built a Wall in the West Bank is to strategically shift the border get access to the West Bank’s mountains where water can be drilled from aquifers. The separation wall has largely been built on Palestinian land along the Western aquifer, which is the richest strategic groundwater basin. The barrier includes a strip of land called the ‘seam zone’ between the Green Line and the actual wall, effectively constituting a further land loss of around 8.5%.

After that, Mr. Omar Barghouthi  gave a presentation on the BDS campaign (boycotts, divestment and sanctions), which was founded in 2005 by Palestinian civil society. The campaign mobilises individuals, groups and organisations to boycott Israeli institutions that support the apartheid politics of Israeli Government, until it complies with international law and Palestinian rights. The campaign is inspired by the civil rights movement in the US against segregation and  discrimination and with the anti-apartheid movement in South Africa. It is base on three basic pillars or principles:

All these demands have a basis in UN resolutions on Palestine and they are simply requesting implementation of international law. Many prominent people, including Stephen Hawking, have supported the campaign. Among other supporters, this campaign has many Israeli intellectuals and organisations on its side. See more details at www.bdsmovement.net.

After these introductions, which set up the context for our mission, we hit the road and went to a small village named Jobet Adeeb, near Bethlehem. Here we saw a Palestinian village from 1925 with no electricity or water sewage system, and a school existing in poverty, while just a few hundred meters away there are Israeli settlements with all needed modern facilities including a compost plant. While one wonders how it is possible that the settlement from 1997 can have all these services, while a village from 1925 has none and they live next to each other, the answer  exposes the double standards of the Israeli government, which declares any construction, including, electricity lines or solar collectors in Palestinian village illegal, simply refusing to issue permits. If anything is built without the permit (which you cannot get in the first place) the Israeli army is there to pull the construction down with sheer force

Back in the van, we head towards Hebron and a village next to the famous wall, built on Palestinian land. The wall separates the village from their agricultural land and now they cannot survive on agriculture. As a consequence they have to find a job either in Israel or abroad, which means people slowly but surely emigrate from the area. Living next to the “fence” also often brings noise pollution from military training during the night.

Water shortage is another issue. Harvesting rain water provides non-drinkable water that lasts three months. For drinking water and all the water needed during the rest of the year, the villagers buy water from a private Israeli company, which absorbs about 20% of their income. 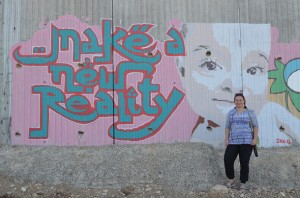 Jagoda Munic, chairperson of Friends of the Earth International, at the wall

Friday, October 11
Early morning and we are heading north, to the city of Tulkarem, where we meet representatives from the Palestinian trade union. Our guide for the day is Dr. Kefaya Abu Al Huda, an expert in hazardous waste. The trade union has been fighting over the years to improve the working conditions in the chemical, plastic and pesticide industry, which they have succeeded by organising several general strikes over the years. However, there is still a big problem of children that work in the factories and  frequent accidents including explosions and open fires.  When I asked a question about the position of the trade union about the closing down of the factories, the answer is – yes we want to close them down, as workers can work in less polluting industries or in agriculture. It has to be pointed out that the the Geshuri factories that produce pesticides and fertilisers,  have been moved from the vicinity of Israeli towns and settlements twice in the 1970s, as the Court ordered them to close down due to high level of pollution and non-compliance with Israeli environmental and safety regulations.  However, they’ve reopened in the Palestinian territory on a high quality agricultural land and above water aquifer, just next to the town in the 1980s.  “Since then, the level of cancer in the area increased significantly and it is much higher than in other areas of Palestine”,  declares Dr. Abu Al Huda. “I can prove this with data from my research” she said.

Indeed, when we came close to the factories, we could see for ourselves – the smell was so awful that it was difficult to breathe. Just across the road there was a local town, with wind blowing the fumes directly to the buildings. The factories are built in a manner that Palestinian villages are downwind most of the time.  Workers passed us on their way to the factory, there was a shift change. They greeted the union representative, but refused to speak with us or to give a statement. “Look, there is a 13 or 14 year old boy,” said Elaine.

It was easy for us to run away from the pollution to the next point of our visit, but I sincerely do not know how anyone can live in such proximity to the chemical industry. It is more than a nuisance, it is a health hazard.

The  next stop is the famous wall in the town of Qalqelia. Here we can walk right next to it. “This is definitely not a fence”, some graffiti says, which is indeed true of a 7 meter high concrete wall with barb wire on the top. “This is apartheid”, we read, but also: “this wall will never stop our voices”. Indeed,  the voices of Palestine have to be heard!