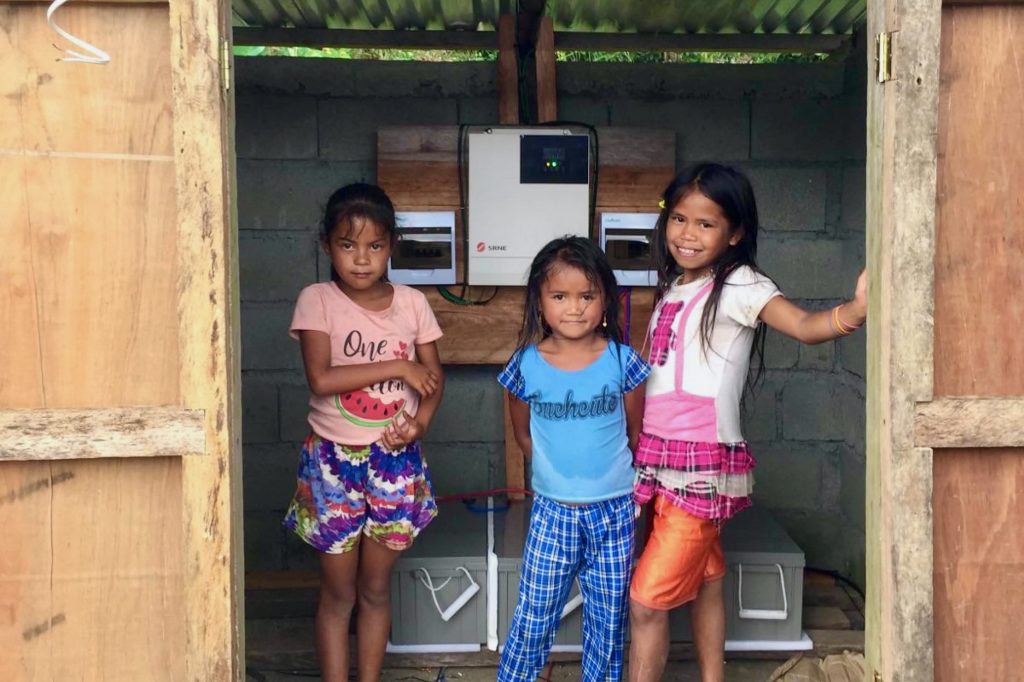 On the southern Philippine island of Mindanao, the Legal Rights and Natural Resources Center (Friends of the Earth Philippines) have been working with a T’boli-Manobo indigenous community to achieve energy sovereignty, in the form of a solar-powered off-grid system.

In March 2022, the village of Ned in South Cotabato province leapfrogged from having no electricity to having their very own micro off-grid system using photovoltaic technology. This kind of solar energy model is aligned with a low-carbon development pathway for the country, and can be scaled-up for remote areas through the government’s Rural Electrification Programme, for which completion rate is currently at 91%.

It is a victory for the community, which has been locked in a decades-long struggle against a corporate coffee plantation and currently faces the new threat of a coal power plant.

“’Te, gusto kamo sang radish (Do you like radish)?” Agustin shouted as I walked back to the house where we were staying.

“Where will you get them?”

“Salamat! Thanks! Please ask permission from your father.”

On the second day in Datal Bonglangon, Ned village, the solar installation team was almost done with their work. Only a few houses were left to be connected to the central power station. At around 5:30 in the afternoon, the small village with more than 45 houses would finally have light.

Some residents brought root crops and avocado for the solar installation team to bring home, to show their appreciation. Eight-year-old Agustin was one of them.

“I can now study at night,” he said softly with a dimpled smile.

His friend, Orlando, agreed with him: “We will have light”. Like many indigenous communities, Datal Bonglangon does not have electricity. They used oil lamps before but later shifted to battery-powered flashlights and lighters because of the high cost of gasoline.

Agustin is a pupil of the Danyan Elementary School, named after Datu Victor Danyan, who donated the parcel of land on which the school was built. On 3 December 2017, Datu Victor Danyan, his two sons and his son-in-law were killed by the military in a brutal encounter. Orlando’s father was also among those who died, when the boy was only five years old. The two boys can still remember the sound of the guns and bombs. “We were so scared. We ran and rode a cart to Tulale.”

For almost 20 years, Datu Victor Danyan led the T’boli-Manobo S’daf Claimants Organization (TAMASCO) in opposing the Dawang coffee plantation. In 2016, when the permit for the plantation expired, the government allowed M&S company to continue exploiting the land, on the technicality of merging it with an earlier permit, without the consent or consultation of TAMASCO. M&S is a subsidiary of DMCI (David M Consungji Inc.), a Filipino family-owned business conglomerate.

After the military operations in Datal Bonlangon, which left eight people dead, several TAMASCO members were arrested and charged with murder and other trumped-up cases. One is still languishing in jail, while the others are on bail waiting for the resolution of their cases. Datu Victor’s sister, Adina Ambag, misses her son who was taken by the military and brought to Cotabato City.

Lemmy Danyan, one of the community volunteers assisting the installation team, said the solar project would now provide them with a sense of security.

“We are afraid to get out of our houses at night because of what happened here in 2017. But now that we have electricity, we feel safe” he said, beaming.

He would also be able to study well at night like Agustin and Orlando. Lemmy is a second-year college student taking up Business Administration. He hopes to finish college soon so he can support his family and their community. “We will help them read and write.”

Lemmy’s father, Datu Victor’s elder brother, died when he was still a child. They believe that his illness was caused by so much despair because of the continuing encroachment of the coffee plantation. Even with the issuance of a cease-and-desist order by the National Commission on Indigenous Peoples (NCIP) in 2018, the M&S Company still operates within the T’boli-Manobo community’s ancestral domain.

Datal Bonglangon is one of the five clusters under TAMASCO. The organisation chose it as the pilot site of the solar micro-grid that would provide essential lighting to 60 houses, and a standard charging station at their community hall where they can charge their mobile phones and flashlights. For now, 46 homes will have electricity.

Lemmy and the other community volunteers will install future connections, including the extension school which is situated quite far from the houses. The school’s headteacher has already promised to provide the additional wiring needed to connect it up. Once they have electricity, the teachers will be able to let the children watch educational videos.

“I’m glad that our community is being lighted up. We’ve been waiting for this for a long time,” Ye Adina said with a big smile.

But her face was immediately filled with sadness as she spoke softly, “But more than the solar light, I’m hoping that my son will arrive. He is my light.”

From energy poverty to people power

The Philippines’ current model of energy generation and transmission is centralised. Energy is produced in large power plants, predominantly by burning oil and coal. It is then distributed over a networked grid, with most of this (57.6%) being funnelled to transport and industry, including heavy manufacturing, mining and construction.

Energy poverty is a reality for many people in the Philippines. Households are left with only a quarter of the national energy consumption, and over 1.3 million Filipinos in rural areas don’t have electricity in their homes. Access is also more limited for those living in rural zones than for residents of sprawling cities like Manila and Quezon.

Worldwide, around 770 million people – or one in ten – do not have access to electricity. Many more suffer from inconsistent or poor quality access, and for an ever increasing number of people, electricity is too expensive to afford.

Yet, access to energy is a basic human right and a necessary condition of a dignified life. It impacts all aspects of our lives – the ability to cook, study, stay warm and dry, work, travel, get healthcare, and communicate. In the context of increasing climate shocks — felt most keenly in countries in the global South who lack the infrastructure or resources needed to adapt and mitigate the impacts of extreme weather — the need for a transformation of our energy system is ever more pressing. This means steering away from burning fossil fuels for energy, towards harnessing renewable energy sources, through systems that are controlled and owned by people, not corporations.

This solar installation project was supported by the Legal Rights and Natural Resources Center (LRC/Friends of the Earth Philippines), through a grant from Friends of the Earth International. The work does not stop with this installation. A forthcoming discussion paper from LRC will expand on this and other discourses to transform the energy sector.

Sanag means light or brightness in Hiligaynon. The original story was written by Jean Marie Ferraris for the LRC website. This version was adapted by Madeleine Race for Friends of the Earth International. All photos © EM Taqueban/LRC. This video about the project was produced by LRC: