Skip to content
HomePressPeruvian farmers vote against gold mine 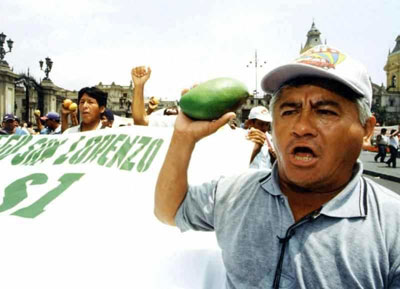 June 4, 2002 – Citizens of the Peruvian municipality of Tambogrande stated loud and clear in Sunday’s referendum that they do not want the gold under their village to be mined. Seventy percent of Tambogrande’s population (a total of 36,000 people) voted in the referendum, organized by the people themselves, and 98 percent of voters said ‘no’ to the mining proposal. Several campaigners from Friends of the Earth International were present during the referendum as international observers.

The US$315 million open-pit gold mine planned by the Canada-based Manhattan Minerals Corporation would rip apart the village of Tambogrande and displace about a third of its population. However, local farmers are determined to protect their agricultural livelihoods from destructive mining activities.

“The valley used to be a desert, but over the years irrigation and hard work have turned it into a beautiful and fertile place that produces lemons and mangos for national use and for export,” said Astrid Cornejo of Labor/Friends of the Earth Peru. “Mining in this country, on the other hand, has hardly brought any benefits to local communities.”

Miriam Roseleur, who was present at the referendum as an international observer, maintained: “The El Niño phenomenon can bring heavy rains here, and with it a real danger of soil, water and air contamination. The local people are completely justified in not wanting to jeopardize their livelihoods for this risky venture.”

Tambogrande is the only project of Manhattan Mineral Corporations, an otherwise unknown Canadian company. Resistance against the mine has been strong from the outset. On February 27th and 28th of 2001, a total strike and massive mobilization in Tambogrande called for the corporation to withdraw, and the company’s encampments were destroyed. A month later, agronomist and resistance leader Godofredo García Baca was murdered under suspicious circumstances. The citizens organized the referendum in order to make it completely clear that they do not want the mine in their midst.

“Today was a celebration of democracy. All of these people who came to vote voluntarily have started a chain reaction of energy and empowerment,” said Gloria Chicaiza of Acción Ecologica/Friends of the Earth Ecuador, who also observed the referendum proceedings. “The Peruvian government and Manhattan Minerals can not ignore the voice of these people, who clearly want to preserve their sustainable way of life.”

Peru has a rich history of metals mining, and about 50 percent of its export income is derived from mining products. However, the local population has seen little benefit from the mines. The Southern Peru copper mine and even the World Bank supported Yanacocha gold mine are just two examples of controversial projects in the country. Their operations have led to a wide range of serious complaints from local communities, including fish kills and desertification. With this background, the people of Tambogrande have chosen very clearly in favour of agriculture and against mining.

“Tambogrande is an emblematic case of a local community standing up for the right to choose its own development model’, said Gabriel Rivas-Ducca, Friends of the Earth International’s mining coordinator. “Recognizing the outcome of the referendum could mean a significant step in the direction of more democratic and sustainable societies.”