LUXEMBOURG - Three 'monkeys of truth' met EIB Governors attended the Annual Meeting in the Bank's headquarter in Luxembourg this morning. The Monkeys, covering respectively their ears, eyes and mouth were sent to convey the message: EIB – sees no problem, hears no complaints, gives no information.

This action brings to public’s attention the highly non-transparent EIB behaviour and need to reform the Bank. NGOs presented a call to the Governors of the Bank and President Maystadt asking for greater efforts in fostering timely and adequate access to information on the bank's operations for affected communities and the general public. The call has been supported by more than 100 NGOs from all over the world.

Magda Stoczkiewicz, campaign coordinator for CEE Bankwatch Network/Friends of the Earth International, explained: "EIB is a public institution behaving like a private entity from 50 years ago. Its new information policy, which we hoped would be an important step towards the Bank's openness, is filled with "non-committal phrases" promising to release information "whenever possible" and "as early as feasible". It does not provide a solid basis for affected communities or interested public to execute their right to information. “At the same time,” continues Stoczkiewicz, “the Bank favours the interests of its clients over the interests of affected citizens. Clients, including private companies, decide if information about the project they sought financing for is released or not. This is unacceptable." 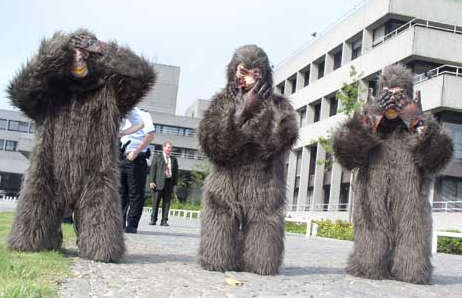 In the call NGOs demand, among other things, that the EIB ensures that affected communities are adequately and timely informed and consulted before the approval of projects and throughout the life of the projects, that all relevant documents are made public at least 60 days before public consultations, and that the EIB support only projects that enjoy the demonstrable free and previously informed consent of all affected communities. The procedure in which the EIB Board decides about the loan prior to EIA process is also unacceptable, say NGOs. Another set of demands refers to ensuring the transparency of the Bank's internal procedures.

Peter Mihok from CEPA, a Slovakian member group of CEE Bankwatch network and Friends of the Earth, explains the practical impacts of the present EIB policy: "the EIB keeps on refusing to release the conditions of a 200 million Euro loan that the Bank provided to the Railways of the Slovak Republic in 1999, arguing that it is up to the promoter and national authorities to release it. At the same time Slovak authorities point out the provision of business confidentiality that the EIB loan agreement contains. We, the affected citizens, feel as if we live in a Kafka novel.” The loan to Slovak Railways apparently contains a set of conditions detrimental to the railway sector; such as the dismantling of a part of regional infrastructure, significant cuts in public subsidies, and a planned reduction in one third of railway employees. Recent closures of a number of regional lines has already led to the first ever strike since the fall of communist regime. The EIB denies its responsibility in the matter while at the same time refusing to disclose the loan agreement. 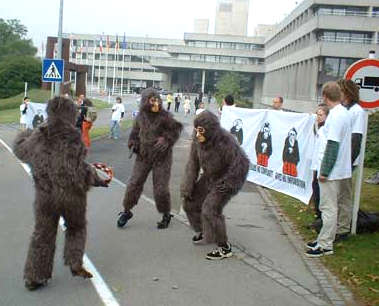 Antonio Tricarico from Campagna per la Riforma della Banca Mondiale, Italy argues: "the EIB should be a subject of the Aarhus Convention on Access to Information, Public Participation and Access to Justice. However, due to its dual status as an EU institution and a bank, the EIB tries to avoid that obligation. The European Commission and Council should ensure that the Bank is clearly bound by Aarhus."

As the EIB originally did not plan to organize its own press conference for the occasion of its Governors' gathering, NGOs invited President Maystadt to join their press conference and inform the public about the outcomes of the General Meeting. However, the response which we received on May 28th was negative, informing NGOs that the President has other important matters and that a press release will be sufficient. On May 31st we found out from the information on the EIB’s web site that the Bank finally decided to hold a press conference. "Good that the EIB has reconsidered their decision about the press conference. However this is a good example of a typical EIB behaviour, we need to have clear rules on access to information and documents in the Bank and not leave it up to someone’s changing mood as it is now” - sums up Magda Stoczkiewicz.