This publication presents the official contribution of Friends of the Earth Asia Pacific region, elaborated by its member groups from Philippines and Indonesia, for the third session of the open-ended Intergovernmental Working Group (IGWG) on Transnational Corporations (TNCs) and other business enterprises with respect to Human Rights, taking place on 23-27 October 2017, in Geneva.

The content includes proposals to be considered by United Nations member states developing the structure and elements for the new binding instrument, herein called the UN Treaty. These proposals are built from APAC member groups and community struggles that challenge the immunity of International Financial Institutions (IFIs), such as the Asian Development Bank (ADB) and the Asian Infrastructure Investment Bank (AIIB); expose corporate crimes committed by TNCs and financiers on plantations sector in Indonesia and; call for instruments for environmental and human rights defenders protection, especially concerned to woman defenders, to be included and implemented under the UN Treaty, having actual examples in national laws. 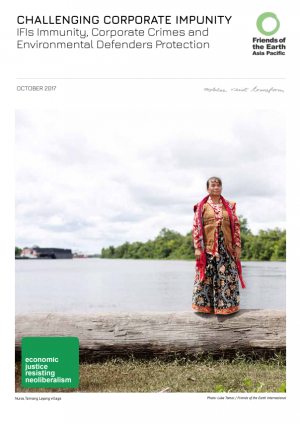