This briefing gives a summary of how agrofuels impact food prices and what this means for the world’s poorest people. When food prices – and with it, hunger – began to rise dramatically in 2008, researchers and scientists started to look at the role agrofuels might be playing. Food prices shot up again in 2011 and in 2012, pushing over 40 million extra people into poverty. The use of agrofuels has risen through government targets and mandates such as the European Union (EU) 10 per cent renewable transport fuel target. Numerous studies and models have looked at the impact of agrofuels on global food prices and the impact of high food prices on poverty and hunger. 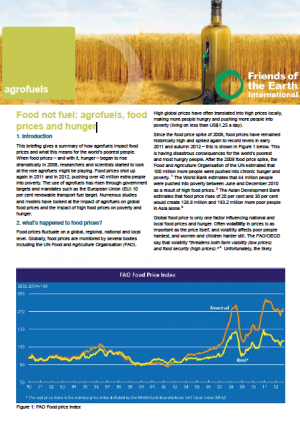