TOKYO (JAPAN) / LONDON (UK), 10 March 2003 – A new report released today on the eve of the Third World Water Forum shows that water privatisation has had negative impacts on communities in many countries and threatens to affect an increasing number of people in 2003, the United Nations International Year of Water, and beyond.

The report, ‘Water Justice for All’ is released just prior to the March 16-23 World Water Forum in Kyoto, Japan and World Water Day (March 22). It reports “global and local resistance to the control and commodification of water” through 14 case studies [1] and was published by Friends of the Earth International [2].

This report is available in English, French, Spanish, and Japanese.

The Third World Water Forum in Japan will adopt a World Water Action, drafts of which show some very impressive rhetoric. But the bottom line is increased market access for private water companies, and corporate lobbyists will be present in numbers to ensure that this happens in Kyoto.
Only about 5 percent of the world’s water is currently in private hands. The water sector thus has an enormous potential for the few multinational corporations that dominate this market: mainly Suez (France) and Vivendi Universal (France) but also Thames Water (UK but part of German RWE) and Betchel (USA).

According to Hemantha Withanage of Friends of the Earth Sri Lanka:

“Water is a basic human right, and although water management in the public interest may be necessary, this vital resource should not be subject to ownership. International financial institutions, hand-in-hand with multinational water corporations, are paving the way by conditioning their loans to poor countries upon privatisation promises. Trade treaties are helping by requiring countries to deregulate their water sectors and open them up to private investment. ”

“The world’s poorest people are desperately in need of water and sanitation services, but experience has shown that they are just further marginalised when their countries follow the corporate mode of privatisation. Unable to afford connection to the services, they are condemned to using water that runs the risk of being contaminated,” according to Withanage.

In the report Friends of the Earth Malaysia states that: “The World Bank and other international financial institutions play a key role in promoting water privatisation around the world, in alliance with the multinational water giants and the trade agreements, promoted by industrialised countries, that pry water markets open for corporate access.”

“The World Bank’s insistence that “water must be treated as an economic good” means that if you are rich enough, you can use water as wastefully as you like. For the poor, however, access to water for even the most basic of needs will be a daily struggle, ” according to Friends of the Earth Malaysia.

Since water is a critical resource for sustainable livelihoods and therefore a human right, water as a resource (ie water in or on the ground) should never be privatised, according to Friends of the Earth International. However, some countries have found it possible to establish appropriate controls that permit efficient and equitable operation of water delivery systems by private firms.

The international community should look to systems such as that in the Brazilian State of Rio Grande del Sul, where water companies are publicly-owned yet financially independent from the government. Management is based on models of civil society control over operations and public participation in making investment decisions. This model has succeeded in providing affordable clean water to those who lack access, and shows that public sector solutions are also viable.

This report is available in English, French, Spanish, and Japanese. 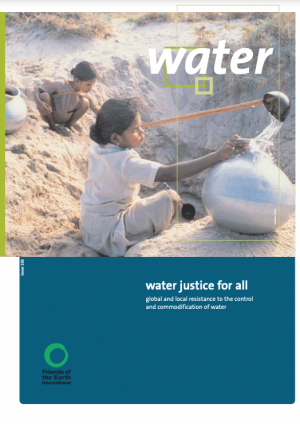