Complaint to the UK and Dutch National Contact Points under the Specific Instance Procedure of the OECD Guidelines for Multinational Enterprises.

Friends of the Earth International and Amnesty International are concerned by Shell’s repeated claims about the proportion of oil spills in the Niger Delta that are due to sabotage committed by criminal gangs. While the Complainants appreciate that sabotage does occur, there are concerns that the figures used are too high, arbitrary, incorrect, misleading, and confusing. In some instances, figures given by the company are contradicted by figures used in relation to oil spills in other public material or comment. Despite repeated requests being made in the past, Shell has failed to make clear the basis for the figures they have published and how the data were gathered. Specifically, the company has failed to address claims that the data are not based on impartial evidence gathering. This has led to a perception that the figures are unproblematic and undisputed, which is far from the truth. 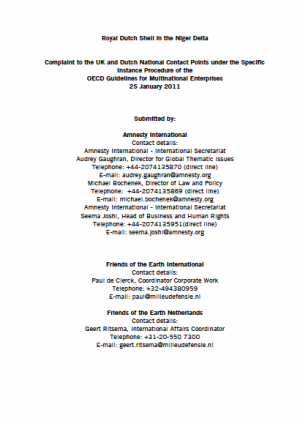