Our report: A warning to stop the MercoSur-European Union Free Trade Agreement

Transnational corporations have sought to expand their territorial control of the Amazon for decades. Year after year, they encroach deeper into the world’s greatest tropical rainforest, expanding agriculture and mining, and pursuing the false solutions offered by ‘green capitalism’, such as large dams, carbon capture and storage, and other emissions offsetting projects.

The expansion of the free trade regime, with Brazil entering into agreements that protect foreign investors whilst limiting regulation and public policies, threatens to intensify violent processes of land grabbing in Brazil, particularly in the Amazon region.

This report from Friends of the Earth International and Friends of the Earth Brazil offers some insight into the Amazon context and the fires that occurred in 2019, as a warning of the potential impacts of the Free Trade Agreement between Mercosur and the European Union. The deal, which is a key part of the partnership agreement signed by both blocs in 2019, is pending ratification.

This Mercosur-EU Free Trade Agreement is set to intensify trends of territorial expansion, and will directly impact the rights, territories and ways of life of Amazon peoples. It will contribute to the climate crisis, fuelled by large-scale agriculture, through an estimated emissions increase of 8.7 million tons of greenhouse gases per year. Within an architecture of impunity, the deal would mean that transnational corporations and foreign investors are granted ever more rights at the cost of rolling back public policies and undermining peoples’ rights.

Read the report, our warning to stop the Mercosur-European Union Free Trade Agreement: 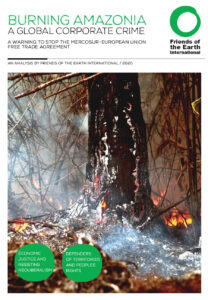 The report is also available in Portuguese and Spanish.