The Regional Comprehensive Economic Partnership (RCEP) is being negotiated by 16 countries in Asia. Negotiations include China, members of the Association of Southeast Asian Nations (ASEAN) and other key trading nations such as Australia, South Korea, Japan and India. This mega-Asia trade deal will impact the lives of billions of people, affecting everything from ability to access quality food, to the affordability of life-saving medicines.

Trade experts across Asia have assessed the RCEP negotiations against criteria for transparency, public participation and good governance. Our new study RCEP: A secret deal found great cause for concern; the negotiations have failed international standards of transparency and public engagement.

The report by Friends of the Earth International, the Transnational Institute (TNI), Indonesia for Global Justice, Focus on the Global South, and Paung Ku, found the RCEP negotiations to be extremely secretive, with little or no official information made public on the state of negations, and no release of draft texts or key government positions. The only way to to access details about the RCEP deal is through leaks. The deal lacks independent social, economic and environmental impact assessment.

Our report exposes the secrecy surrounding negotiations and lack of stakeholder engagement, while big business lobby groups have a privileged, semi-official role. This corporate capture has led to trade outcomes that favor big business, and corporate impunity at the expense of the environmental and human rights, and health and safety standards. These outcomes include an Investor State Dispute Settlement and intellectual property provisions that benefit pharmaceutical corporations.

The majority of RCEP member parliaments are shut out from meaningful participation in negotiations, with individual ministers capable of signing onto trade deals without the need for parliamentary debate or approval. This lack of public and parliamentary oversight makes the deal vulnerable to corruption.

Yet secrecy is not inevitable. Our report shows it is possible to conduct Asian trade negotiations in a way that allows for increased transparency and public participation. 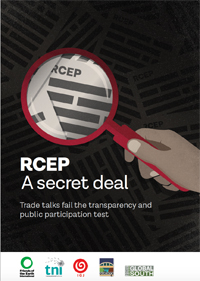