While the Trans Pacific Partnership (TPP) appears to be dead and negotiations on a Transatlantic Trade and Investment Partnership (TTIP) stalled, another similar corporate trade deal still in the making - the Trade in Services Agreement or TiSA – maintains significant threats for essential protections for people and planet.

Over the last few decades there has been a proliferation of international trade and investment agreements, based on the idea that countries should boost their economies by focusing on exports. This drive for ‘free trade’ got up to speed in 1995, when the World Trade Organization (WTO) was established to oversee global trade negotiations [1]. There have also been many bilateral trade and investment agreements between specific countries and regions over the years.

However, these negotiations and deals have been extremely controversial. They are driven by the wealthiest countries, who have better negotiating expertise, and an avid interest in accessing new export markets and sources of raw materials. Negotiations also work in the interests of the largest companies, who are more likely to benefit from international trade opportunities that drive down wages and costs for raw materials. The neoliberal trade agenda has thus been fundamental to the emergence of companies with worldwide reach based on global production chains.

By briefly comparing TTIP, TPP and TiSA this study shows how these proposed pacts are not just individual ‘mega-regional trade agreements’, but part of a broader global strategy driven primarily by the US and the EU, with potentially devastating consequences for people and the environment in many parts of the world.

The current trade and investment system—including TTIP, TPP and TiSA—needs to be challenged and fundamentally transformed in order to achieve a more just and sustainable world.

[1] ‘Free trade’ negotiations have been underway as part of the General Agreement on Tariffs and Trade (GATT) since the end of the Second World War. The Uruguay Round of GATT negotiations resulted in the establishment of the World Trade Organization, which came into being on 1 January 1995. 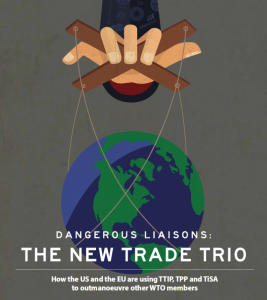