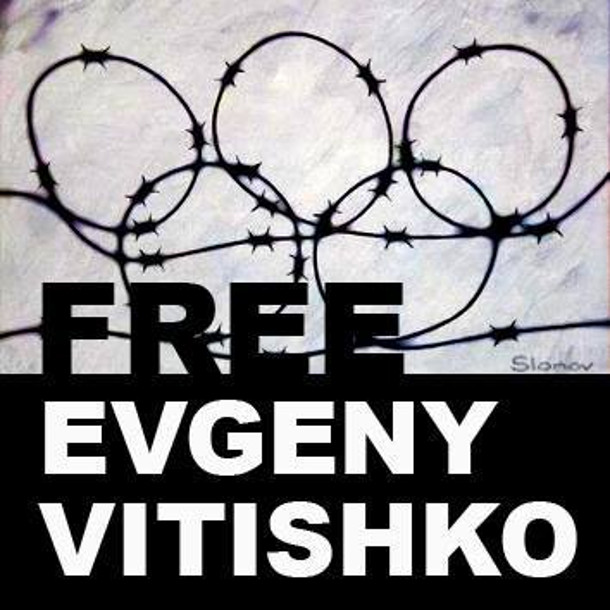 On February 12, 2014 a verdict against a well known environmental activist Evgeny Vitishko entered into force. Evgeny is a member of the Board of Environmental Watch on North Caucasus (Ecovachta)- member organization of the Russian Socio-Ecological Union (RSEU). We believe that this is a glaring case of an activist being persecuted for his environmental activities. Also, in Russia, and in particular in Sochi, persecution of environmental activists who oppose the destruction of nature in connection with the 2014 Winter Olympics continues.

On November 13, 2011, activist group “Environmental Watch on North Caucasus” held a public inspection of the forest adjacent to the property owned by the head administration of the Krasnodar Territory Alexander Tkachev. In order to conduct an inspection,  activists had to dismantle a section of a fence built illegally around the residence on the lands of the state forest reserve. During the inspection it was found that in order to construct the fence dozens of trees , including the Pitsynda pine, listed in the Red Book of Russia [a state document detailing rare and endangered species of flora and fauna], had been cut down. Illegal felling of trees listed in the Red Book is a criminal offense. It was also found that illegal work was carried out within the public shoreline of the Black Sea, which is now blocked by a solid concrete wall. In connection with violations of the rights of citizens guaranteed by the Water and Forest Code during the construction of the Tkachev residence, Environmental Watch sent several appeals to the law enforcement authorities of the Krasnodar Territory in 2011. Moreover, two letters describing the violations, in June and August of this year, were given in person to the Russian President Dmitry Medvedev. However,law enforcement agencies have taken no action against the owners of the residence. Instead, they began to pursue the civil society activists.

Evgeny Vitishko was recognized as a political prisoner by the Human Rights Center “Memorial” on February 13, 2014, as the prosecution will be charging Vitishko with an offence that did not take place. This is in violation of the right to a fair trial and demonstrates the use of disproportionate punishment. The activist was charged under Part 2 of Art.167 of the Criminal Code (“Deliberate destruction or damage of property, if these acts inflicted significant damage, motivated by hooliganism “) for damaging the fence around the garden of Krasnodar Governor Alexander Tkachev. On June 20 2012, he was sentenced to three years imprisonment with two years probation. On December 20, 2013 the court overturned the probation and replaced it with 3 years in a penal colony. On February 12, 2014 the decision came into force.

Environmental Watch on North Caucasus repeatedly stressed that the prosecution of Vitishko for damaging the fence is politically motivated and unproven. As pointed out by the Russian Supreme Court in its judgment of 21 October, 2013, during the appeal against the sentence, to put stickers on an illegal fence in the forest can not be considered hooliganism, and in fact there is no evidence that the owner suffered significant damage.

The formal reason for the ending of probation was an alleged violation by Vitishko of the conditions of restrictions imposed on him. But these  so-called violations are ridiculous. The prosecution claims there were three. The notice of the first one was issued to him when Vitishko went to Krymsk on an election campaign, and advance notice to the inspection was given. The second notice was issued when Vitishko appeared for his scheduled inspection, not on the day that he was ordered to show up. A third notice was issued after Vitishko’s visit to Krasnodar. In order to collect enough evidence to imprison Vitishko, he was held under constant surveillance by the authorities, his phones were tapped, and his whereabouts tracked by using mobile phone billing.

One of the possible reasons for the prosecution may be a report prepared by Ekovahta: “Sochi 2014: ten years without a right to law. How to build a ” better world”. The report is a culmination of the decade of work by environmental activists Evgene Vitishko, Dmitry Shevchenko and Suren Ghazaryan. It contains a chronicle of the construction of Olympic facilities in Sochi and it’s consequences.

However, the International Olympic Committee (IOC) refuses to see the Sochi connection in the case of Vitishko. The IOC thus relinquished responsibility for the persecution of Vitishko, and revealed that it’s officials do not have the competence to make public statemenets on this issue. Environmental Watch on North Caucasus believes that this may violate the IOC Olympic Charter.

On February 12 Evgeny Vitishko began a hunger strike to protest against the unjust decisions of the Tuapse municipal and Krasnodar regional courts.

More information about the persecution Evgeny Vitishko can be found here.

Ekovahta report about the destruction of nature “Sochi 2014: ten years without a right to law. How to build a ‘better world’”