Skip to content
HomeNewsRWR: Unsettling – Interview with Ayman Rabi about the Friends of the Earth International Mission to Palestine 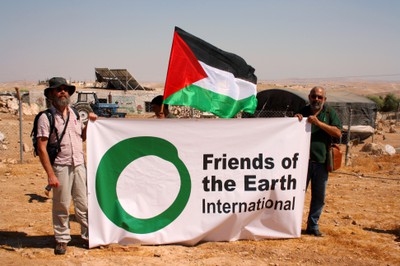 For two days Bobby Peek of Friends of the Earth South Africa and Eurig Scandrett of Friends of the Earth Scotland, spoke with people from local communities of the West Bank and witnessed the environmental damage caused by Israeli industrial, commercial and settlement activity. Real World Radio interviewed Pengon campaigner Ayman Rabi about the FoEI mission in Palestine.

Listen to the interview on Real World Radio

PENGON is a member group of Friends of the Earth International that campaigns mainly on access to land and water, as well as climate change and some issues related with community empowerment through fostering the existing of the local communities.

Ayman explained that the FoEI mission aimed to “eye witness on the current environmental violations caused mainly by the Israeli occupation to Palestinian territory”. It was also aimed to “show them the current discriminatory practices against Palestinian farmers”.

The mission visited different communities in the West Bank that suffer from water scarcity and from settler violations. Ayman said those communities suffer “pollution problems created by the waste water disposal of (Israeli) settlements existing in that area (…) and also restrictions imposed on Palestinian farmers from using the land caused by the separation wall created” by the Israeli government.

The construction of the wall began in 2002 under the then Prime Minister Ariel Sharon in order to “avoid the infiltration of Palestinian suicide bombers in Israel”. The International Court of Justice of The Hague (The Netherlands) declared the wall illegal in 2004, since it cuts across Palestinian lands in the West Bank. The United Nations also condemned its construction. As a result of the building of the wall, nearly 500,000 Palestinians are separared from their lands and work places.
After the mission, PENGON aims to disseminate the conclusions as wide as possible in order to do advocacy work and to have an impartial view of the situation in Palestine.

Listen to the interview on Real World Radio