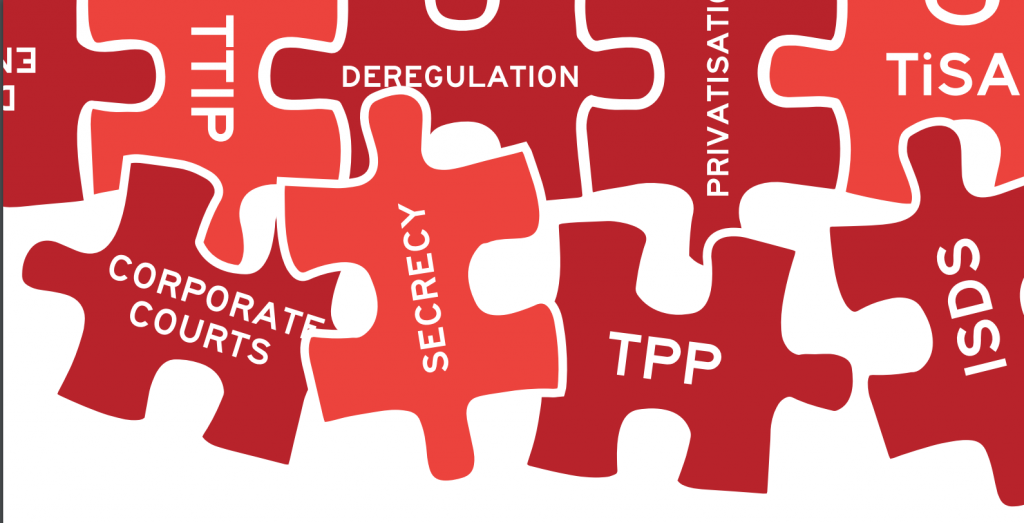 1 December 2016 – While the Trans Pacific Partnership (TPP) appears to be dead and negotiations on a Transatlantic Trade and Investment Partnership (TTIP) stalled, another similar corporate trade deal still in the making – the Trade in Services Agreement or TiSA – maintains significant threats for essential protections for people and planet.

“While the TPP has been much more hyped about than the secretive TiSA talks, our findings show that both deals would threaten hard won rights for citizens and the environment in a very similar way. It would be hypocritical for decision-makers to oppose one of the deals and not the others.”

“The highly secret TiSA deal alone would cover over 65% of global GDP. It could affect the lives of over 1.5 billion people, by leading to increased privatization and deregulation at the expense of the public interest.”

Friends of the Earth US director, Erich Pica said:

“The outcome of the recent US elections should be a wake up call for politicians who are currently negotiating harmful free-trade deals. All across the world people are frustrated at the broken neo-liberal trade system. It is time for politicians and government representatives to take their concerns into account and stop trading away the public interest”.

The key findings of the new report ‘Dangerous liaisons: the new trade trio’ are as follows:

• Public policies are impacted and restricted by all three agreements that involve ‘behind the border’ regulatory changes. All include similar language, mechanisms or provisions, be it ‘Domestic Regulation’ (TiSA), Regulatory Coherence (TPP) or Regulatory Cooperation (TTIP) and Transparency, which may result in corporations challenging and hampering almost any state policy to protect the public good.

• Environmental protection wording in these deals is merely soft law in comparison to the binding liberalization and deregulation provisions, leaving open concerns that all deals would lead to a downgrading of standards identified as ‘barriers to trade’.

• Intense secrecy is another common feature, although it does vary slightly between the different sets of negotiations. TiSA is the least transparent trade agreement, for negotiating texts were not only meant to be kept secret during negotiations, but also for five years after the deal is finalized. Details of the deal are only available due leaks.

– ENDS –
For more information or interviews you can contact:
Sam Cossar-Gilbert, Programme coordinator of Friends of the Earth International. Mail: sam.cossargilbert[at]foe.org.au. Phone: (+62) 812 9412 2587