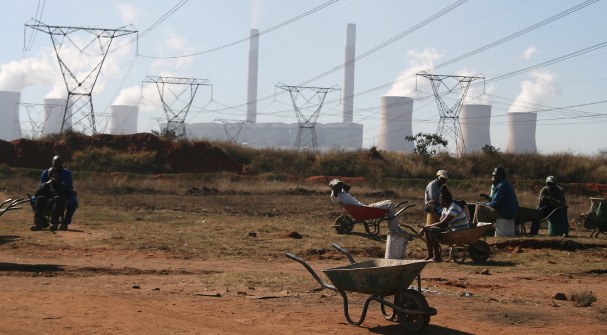 When the government granted Eskom, Sasol, Engen and other industries postponements for meeting air quality standards this week, it condemned communities near those industries to years of toxic, life-threatening pollution. The African National Congress was elected into government to protect people, not poison them.

The Air Quality Act is supposed to ensure that the management of air pollution in South Africa is not only at the point where we breathe air, but also at the source of where the pollution is created; a critical point focusing on the polluter. The decision taken by the government has fatal impacts as Eskom’s activities will kill, prematurely, about 20,000 people over the remaining life of the power plants – including approximately 1,600 deaths of young children.

The status-quo will remain: half the Highveld’s hospital admissions and half the respiratory related illnesses will be as a result of Eskom. The economic cost associated with the sickness and death caused by Eskom, and the neurotoxic effects of mercury exposure, has been estimated at R230 billion (US$20 billion).

To understand the government’s decision, one has to go back to 1995.  On the morning of the 25th March 1995, President Mandela was on his way to opening up a new expansion of the Engen oil refinery in south Durban. An expansion that did not include the necessary pollution reduction equipment, as Engen wanted to save money and admitted so in the refinery’s environmental impact assessment.

Exactly three years after President Mandela’s promise, Engen finally agreed on emission reductions and presented the community with the reduction plan, which the south Durban community forced government to write into the Engen permit.

In 1998, the National Environmental Management Act (NEMA) was enacted. NEMA, in clause 35, allowed for industries to self-regulate their emissions. The petro-chemical industry then used this loophole in 2001 to try and force an agreement through government, which would get them ‘voluntary’ emission reductions rather than face standards. Community people resisted, and this was consequently dropped off the government’s agenda. A victory for society.

However, all was not well. As the Air Quality Bill was being finalized, an exemption clause was included in the Bill. This erroneously was used by Eskom to seek exemptions from meeting emission standards. However they later changed the application to rolling postponements, which in effect is exemptions.

Essentially, the postponements granted by government have made toxic air legal air. Postponements have made section 24 of our constitution redundant. Section 24 states that every person has a right to an environment that is not harmful to one’s health and well-being and to have the environment protected through reasonable legislative measure.

Over the period that the postponements have been granted to Eskom – essentially over the lifespan of the plants, Eskom’s pollution will result in about 20,000 premature deaths, including approximately 1,600 deaths of young children. Government knows these figures: In 2014, various civil society organisations and health experts gave detailed inputs on Eskom’s negative health impact. Yet, with these postponements, government has chosen to ignore the scientific data.

The case of Eskom is particularly concerning as the state owns aone hundred percent of it. The state passed a law in 2004 requiring air pollution standards, and has now refused to obey that very same law. It is as if the police suddenly decided not to obey the criminal code and started to deal drugs from stolen cars, and the Department of Justice, in response, gave the police a pay increase instead of hauling the head of SAPS off to prison.

Of course and as usual, the postponements have been granted in the name of the economy. Forcing compliance to air quality standards now, so the argument goes, would allow insufficient time for compliance and cost too much.

However, industry has had plenty of time to plan and implement pollution control technologies. In fact, since 2004, eleven years of grace in which to adapt their plants. Instead of cleaning up their act, South Africa’s big industrial concerns like Eskom, Sasol and Engen did nothing, forcing a showdown with the Department of Environmental Affairs.

This Tuesday, the Department of Environmental Affairs blinked and climbed down from President Mandela’s promise. In the contest between bonuses for CEOs and special share dividends and the health of South African citizens, government went for the cash.

More alarmingly, in the postponements granted, government does not admit to the true reality that this is not a five-year reprieve, but rather a permanent reprieve and government would have to pick up the cost of Eskom’s pollution as people become ill and put strain on the health system, or strain on the economic system as they are too sick to work.  Ask the very many people who have been turned away from jobs in the Highveld and on mines for they do not pass the entrance medical – essentially they are too sick.

Government has provided an answer to the people in the Highveld, south Durban, the Vaal, Johannesburg and other polluted areas about air quality. The answer to polluting factories, power plants and refiners is simply and sadly for ordinary people to suffer, to cough, to develop chronic respiratory illnesses such as asthma, bronchitis and be vulnerable to diseases like tuberculosis, to suffer various cancers and to bear children with birth defects, and in some cases to die prematurely – all in the name of profit and energy for industry.

Bobby Peek is Director at groundWork and Tristen Taylor is Coordinator at Earthlife Africa Johannesburg.