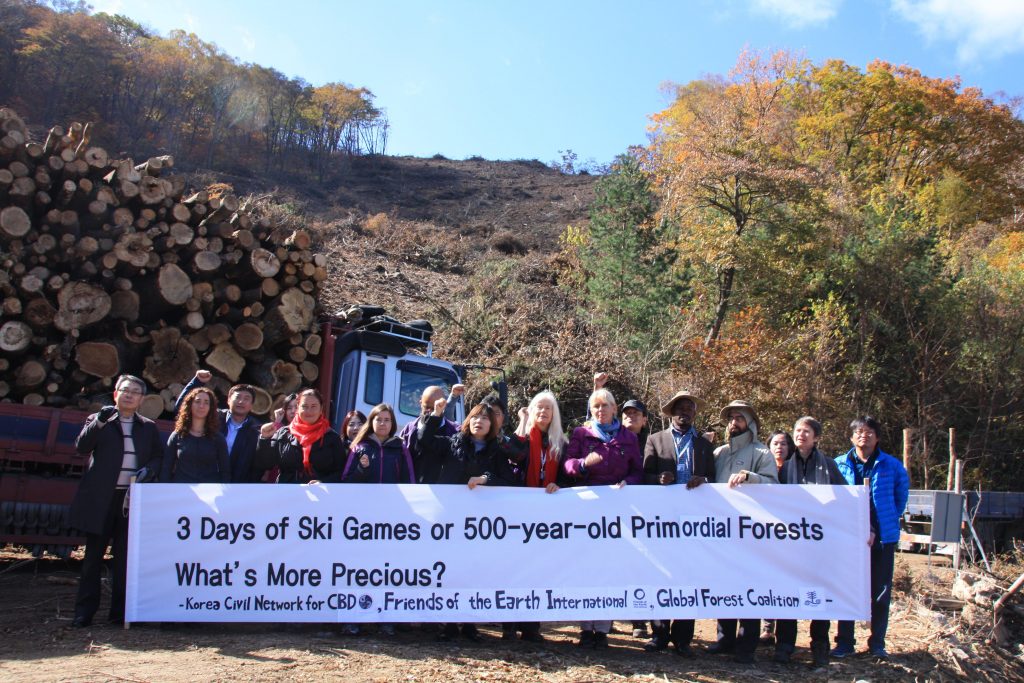 PYEONGCHANG, SOUTH KOREA, 16 October 2014 – Friends of the Earth International campaigners are standing with Korean environmentalists in opposition to the construction of a ski course for the 2018 Winter Olympics in Pyeongchang province, South Korea.

The Olympic ski course is under construction at Mount Gariwang, a protected area, which is covered by an ancient forest that harbours unique species, including the rare Yew tree, the Wangsasre tree, which is only found on the Korean Peninsula, and possibly the oldest oak in South Korea.

A delegation of Friends of the Earth International and the Global Forest Coalition joined members of the Korea Civil Network on the CBD, the Korea Federation for Environmental Movement / Friends of the Earth South Korea, and local communities on a visit to the site, on the occasion of the XII Conference of the Parties to the Convention on Biological Diversity (CBD), which is hosted by South Korea this week.

The forest at Mount Gariwang has been designated by the South Korean Forestry Service as a ‘Protected Area for Forest Genetic Resource Conservation’. Historically Gariwang mountain has a special meaning to the Korean people. During the late 14th century Chosun dynasty, the mountain was considered a ‘royal, forbidden mountain’, and has been under state protection since. However, its special protective status was removed earlier this year to make way for the construction of a ski course for the 2018 Winter Olympics.

Jagoda Munic, Friends of the Earth International chair person said: “The situation at Mount Gariwang reminds us of similar situations in other countries who accept to organize big sports events. There is already existing infrastructure in the region that can be used for the Olympic Games, and it is both ecologically and economically damaging to build a new ski slope to be used for three days only. The Olympic Games should promote the protection of nature, not devastate it. Therefore we support Korean civil society in their campaign to save forest of Gariwang and call on the Korean Government, the International Olympic Committee, and International Ski Federation to consider available, ecologically sound and cheaper alternatives, by using existing ski slopes.”

Simone Lovera, executive director of the Global Forest Coalition said: “What we are observing here are big impacts on the environment, and the division of local communities due to promises made to them about future economic benefits. The planned ski course would cause major damage to a site of both ecological and cultural importance, as it is one of the oldest sacred forests in South Korea. The forests on Mount Gariwang are not ‘restorable’ to their original state because they are composed of an intrinsically balanced mixture of tens of different temperate broad leaf and coniferous tree species.”

Both organisations have sent a letter to the International Olympic Committee (IOC) and International Ski Federation (ISF) reminding them that “the IOC regards the environment as the third dimension of Olympism, alongside sport and culture”. In this light we strongly call upon the IOC and the ISF to save this sacred site of outstanding natural and cultural value and apply the ‘exceptional circumstances’ rule so that the existing, alternative ski course in YongPyong can be used.